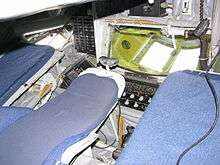 The boom operator in the U.S. Air Force KC-135 lies in a prone position while refueling other aircraft.

In the USAF the position of boom operator is a position held by an enlisted aviator, (rank Airman Basic through Chief Master Sergeant) who is responsible for safely and effectively refueling other aircraft while in flight. The official Air Force title for boom operators is "In-Flight Refueling Technician" but this title is usually reserved for formal paperwork such as Air Medals. The title "boom" is more commonly used. The name boom operator implies that one "operates a boom" which in the case of a tanker aircraft is a long extendable metal arm that connects two aircraft for fuel transfer.

The boom operator also fulfills the role of loadmaster and passenger transport operations.[1]