The Main Entrance to the War Memorial 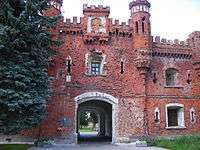 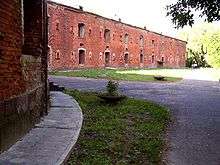 Satirical drawing from "Hasło Łódzkie" newspaper, 5 October 1930. The text: "From the series: 'Most popular Polish spa towns' - Brest-on-the-Bug." The picture is a reference to the Brest trial and the "Brest elections", when many Polish politicians of the Centrolew party were imprisoned in the Brest Fortress (pictured). 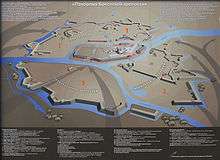 Brest Fortress (Belarusian: Брэсцкая крэпасць, Brestskaya krepasts' ; Russian: Брестская крепость, Brestskaya krepost' ; Polish: Twierdza brzeska), formerly known as Brest-Litovsk Fortress, is a 19th-century Russian fortress in Brest, Belarus, the former Byelorussian SSR. Following the war, in 1965 the title Hero-Fortress was given to the Fortress to commemorate the defence of the frontier stronghold during the first weeks of the German-Soviet War, specifically the invasion on June 22, 1941 (Operation Barbarossa). The title Hero-Fortress corresponds to the title Hero City, that was awarded to an eventual total of twelve Soviet cities. Brest Fortress is situated at an height of 135 meters.[1]

The Brest fortress has sustained its original outline of a star shaped fortification since its construction in the early 19th century. The Citadel, the core of the fortress, was on the central island formed by the Bug River and the two branches of the Mukhavets River. The island was skirted by a ring of a two-storied barrack with 4 semi-towers. The 1.8 km long barrack comprised 500 rooms to accommodate 12,000 soldiers within thick walls built from super strong red bricks. Originally there were 4 gates to enter the Citadel. Today only Kholm Gate and Terespol Gate can be seen, most part of the barrack lies in ruins.

A ring of outlying forts was built later around the old fortress. As the post-1945 border along the Bug river runs through the fortress area, many of the fortification works are now in Poland, around the town of Terespol.

In the late 1960s, the construction of the war memorial complex "Brest Hero-Fortress" was started. The complex was opened on September 25, 1971. [3] The memorial complex is still a national place of grief and pride, a popular tourist attraction. It comprises the barracks, gunpowder bunkers, forts and other fortifications, the museum of the defence, located on the site of the old fortress, along with the new monumental structures: the Main Entrance, the Obelisk, the Main Monument, the sculpture “Thirst”.

This site was added to the UNESCO World Heritage Tentative List on January 30, 2004, in the Cultural category.[4] Preservation and development is being carried out by the Brest Fortress Development Foundation.[5] [6]