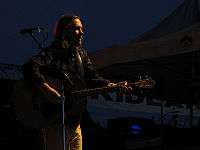 In addition to his bass playing, Ritchie is proficient at the shakuhachi, a Japanese bamboo flute. He acquired a Jun Shihan (shakuhachi teaching license) in March 2003 from James Nyoraku Schlefer, and his professional name is "Tairaku" ("big music" in Japanese).[1]

Since 1998, he has collaborated with American shakuhachi maker Ken LaCosse developing a wide bore style of shakuhachi called "taimu."

In 2007 Ritchie produced and toured with the Italian punk/folk band The Zen Circus, which subsequently changed its name to The Zen Circus and Brian Ritchie. The first international album of the band, Villa Inferno, was released in 2008 for the Italian record label Unhip Records.

In 2008, Ritchie and his wife, Dr. Varuni Kulasekera, moved to Hobart, Tasmania, Australia, where he has guested in a band called The Green Mist.[2][3] Ritchie does most of his work in DV (David Vartanian) Studios.

On Australia Day 2012, Ritchie and his wife were naturalised as Australian citizens.[4]

In 2009 he curated the first Mona Foma (MoFo) festival[5] in Hobart, Tasmania. Since 2009 he has curated Mona Foma every year. At the 2012 MoFo, he organised an impromptu performance of the entire Violent Femmes first album by a 'super band' consisting of musicians playing at MoFo: the Dresden Dolls (Amanda Palmer, vocals, and Brian Viglione, drums), two musicians touring with PJ Harvey's band (Mick Harvey, guitar, and John Parish) and with Brian Ritchie himself on bass guitar and vibraphone.

In 2010 he toured as bassist with the Australian surf instrumental band called The Break, composed of ex-Midnight Oil members Rob Hirst, Jim Moginie and Martin Rotsey. [6] Their debut album Church of the Open Sky was released on April 16, 2010 on the independent label Bombora, distributed by MGM.

In 2011 his home in Tasmania, designed by award winning architect Stuart Tanner, was featured on the TV series Sandcastles.[7]