The British one pound (£1) coin is a denomination of the pound sterling. Its obverse bears the engraving “Dei Gratia Regina” meaning in Latin, “By the grace of God, Queen” and FD meaning ”Defender of the Faith."[1] It has featured the profile of Queen Elizabeth II since the coin's introduction on 21 April 1983.[2] Four different portraits of the Queen have been used, with the latest design by Jody Clark being introduced in 2015. The current standard reverse, featuring the Royal Shield, was introduced in 2008. In addition to the standard reverse one or two new designs are minted each year.

The coin replaced the Bank of England £1 note, which ceased to be issued at the end of 1984 and was removed from circulation on 11 March 1988, though still redeemable at the Bank's offices, like all English banknotes. One-pound notes continue to be issued in Jersey, Guernsey and the Isle of Man, and by the Royal Bank of Scotland, but the pound coin is much more widely used.

The final round coins were minted in December 2015 with its replacement, a new 12-sided design, to be introduced from March 2017 onwards. The new coin is to be of a similar 12-sided shape to the pre-decimal brass threepence coin, have roughly the same size as the current £1 coin and will be bi-metallic like the current £2 coin. The new design is also intended to make counterfeiting more difficult, via an undisclosed hidden security feature, called 'iSIS' (Integrated Secure Identification Systems).[6][7]

To date, four different obverses have been used. For the first three of these, the inscription was ELIZABETH II D.G.REG.F.D. 2013,[8] where 2013 is replaced by the year of minting. The fourth design, unveiled in March 2015,[9] expands the inscription slightly to ELIZABETH II DEI.GRA.REG.FID.DEF. 2015.

In August 2005 the Royal Mint launched a competition to find new reverse designs for all circulating coins apart from the £2 coin.[13] The winner, announced in April 2008, was Matthew Dent, whose designs were gradually introduced into the circulating British coinage from mid-2008.[14] The designs for the 1p, 2p, 5p, 10p, 20p and 50p coins depict sections of the Royal Shield that form the whole shield when placed together. The shield in its entirety is featured on the £1 coin. The coin's obverse remains unchanged.

The design of the reverse of the coin was changed each year from 1983 through 2008 to show, in turn, an emblem representing the UK, Scotland, Wales, Northern Ireland, and England, together with an appropriate edge inscription. This edge inscription may frequently be "upside-down" (when obverse is facing upward).[15] Since 2008, national-based designs have still been minted, but alongside the new standard version, and no longer in strict rotation. The inscription ONE POUND appears on all reverse designs.

In common with non-commemorative £2 coins, the £1 coin (except 2004–07 and the 2010–11 'capital cities' designs) has a mint mark: a small crosslet found on the milled edge that represents Llantrisant in South Wales, where the Royal Mint has been based since 1968.[16] 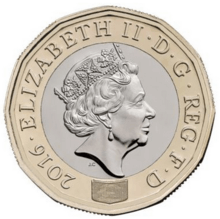 The bi-metallic 12-sided pound coin is due to enter circulation in March 2017.

The reverse of a new 12-sided pound coin, to be introduced from March 2017 onwards, was chosen via a public design competition.[17] The competition to design the reverse of the 12-sided, bi-metallic coin was opened in September 2014.[18] It was won in March 2015 by 15-year-old David Pearce from Walsall, and unveiled by Chancellor George Osborne during his budget announcement. The design features a rose, leek, thistle and shamrock bound by a crown.[9]

All years except 1998 and 1999 have been issued into circulation, although the number issued has varied enormously – 1983 and 1984 in particular had large mintages to facilitate the changeover from paper notes, while some years such as 1988 are only rarely seen (although 1988 is more noticeable as it has a unique reverse). Production since 1997 has been reduced, thanks to the introduction of the circulating two pound coin.

The 2016 coin, with a design by Gregory Cameron, Bishop of St Asaph, is legal tender, but is essentially a commemorative issue, and has not entered general circulation.[22][23]

Counterfeits are put into circulation by dishonest people, then circulated inadvertently by others who are unaware; in many cases banks do not check, and circulate counterfeits. A 2011 BBC television programme withdrew 1,000 £1 coins from each of five major banks and found that each batch contained between 32 and 38 counterfeits; the Mint estimated that about 31 per 1,000 £1 coins were counterfeit.[30] Some of the counterfeits were found by automated machinery, others could be detected only by expert visual inspection.

In July 2010, following speculation that the Royal Mint would have to consider replacing £1 coins with a new design because of the fakes, bookmakers Paddy Power offered odds of 6/4 (bet £4 to win £6, plus the £4 stake back; decimal odds of 2.5), that the £1 coin would be removed from circulation.[27][32]

Some counterfeits are of poor quality, with obviously visible differences (less sharply defined, lacking intricate details, edge milling and markings visibly wrong). Many better counterfeits can be detected by comparing the orientation of the obverse and reverse—they always match in genuine coins, but very often not in counterfeits.[30][31] The design on the reverse must be correct for the stamped year (e.g., a 1996 coin should have a Celtic cross).[33] It is difficult to manufacture coins with properly-produced edges; the milling (grooves) may be incomplete or poor and the inscription (often "DECUS ET TUTAMEN") may be poorly produced and sometimes in the wrong typeface.[30] A shiny coin with less wear than its date suggests is also suspect, although it may be a genuine coin that has rarely been used.[31]

Counterfeit coins are made by different processes including casting, stamping, electrotyping, and copying with a pantograph or spark erosion.[34] In a 2009 survey, 99% of fake £1 coins found in cash centres were made of a nickel-brass, of which three fifths contained some lead and a fifth were of a very similar alloy to that used by the Royal Mint. The remaining 1% were made of simple copper-zinc brass, or lead or tin, or both.[35] Those made of lead or tin may have a gold-coloured coating; counterfeits made of acrylic plastic containing metal powder to increase weight have occasionally been found.[34]

The final 'round coins' were minted in December 2015 with the replacement, a new 12-sided design, due to be introduced in 2017.[36] The coin is to be of a similar 12-sided shape to the pre-decimal brass threepence coin, have roughly the same size as the current £1 coin and will be bi-metallic like the current £2 coin. The new design is intended to make counterfeiting more difficult, and also has an undisclosed hidden security feature called 'iSIS' (Integrated Secure Identification Systems).[17][37]

Current two-pound coins are made from two metals of different colour, and are much harder to counterfeit; counterfeited coins are often easily seen to be the wrong colour.

Other pound coins in circulation

Also legally circulating but not legal tender in the UK, are some £1 coins of British Crown Dependencies, Gibraltar and UK South Atlantic Overseas Territories, being of the same size and composition as their UK equivalent and mostly bearing the same portraits of the UK monarch (as with most other coins of the same territories).[38][39]

In an April 1993 The New Yorker article 'Real Britannia', Julian Barnes describes the meetings to choose the 1994–1997 reverse designs.[40] This is reprinted in his book Letters from London as 'Britannia's New Bra Size'.