Bunt (/ˈbʌnt/, previously spelled Bant and also known as Nadava[1]) is a community from Karnataka, India. They are traditionally found in the coastal and Kodagu[2] districts of Karnataka.[3] The Bunts are described as being the landed gentry and military class of coastal Karnataka.[4] Bunts traditionally follow the Hindu religion.[2] They are noted for following a matrilineal system of inheritance called Aliya Santana.[2]

The word Bunt means powerful man or warrior in the Tulu language.[4]

The word Nadava is a synonym for the Bunts used in the northern region of the erstwhile South Canara district.[5] Krishna Iyer mentions that the Canarese (Kannada) speaking Bunts are called Nadava or Nad Bunts.[2] 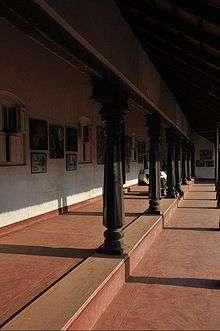 According to S. D. L. Alagodi, the Bunts "originally belonged to the warrior class. Being the martial race of Tulu Nadu, they served the ruling chiefs which brought them considerable benefits and allowed them to become the landowners and nobles of the region."[4][6]

The Bunts are of Brahmin and Kshatriya descent from the Nagavanshi lineage and are forward caste.[7]

The feudal life and society of Bunts began to disintegrate in the succeeding colonial British Raj period. Bunts today are a largely urbanized community.[8]

There are about 90 clans found among the Bunts. They claim descent from the Alupas kings.[9][10] 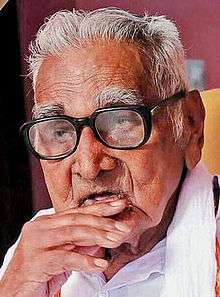 The Kodialguttu joint family of Bunts. Most members are seen in traditional attire though some men have taken to western attire (circa 1900)

Traditional Bunt houses can be seen across the Tulu Nadu region. One of the more well-preserved houses, Kodial Guthu, stands at the centre of Mangalore city.[13][14] Other examples can be seen at Badila Guthu[15] in Kannur, Dakshina Kannada, Kowdoor Nayarbettu in Karkala taluk and Shirva Nadibettu near Udupi.[16]

There are many organisations that cater to the needs of the community. These include the Bunts Mathr Sangha based in Mangalore.[17][18] Since the 20th century when Bunts began to emigrate out of their native region organisations have been formed elsewhere, such as in Mumbai,[19] Kuwait,[20] United Arab Emirates[21] and the United Kingdom.