Cabo Girão is a lofty sea cliff located along the southern coast of the island of Madeira, in the Portuguese archipelago of Madeira. Cabo Girão is a popular lookout point, especially after a glass-floored viewing platform was installed in October 2012.[1] The location is a popular starting point for hikers. 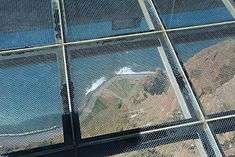 Looking down through the skywalk

The Cabo Girão Skywalk is the highest cliff skywalk in Europe, located on top of the cabo Girão Cliff in Madeira Island. The skywalk opened in late October 2012, before the skywalk was constructed, Cabo Girão was one of Madeira's most popular tourist attractions with an estimated 1800 tourist visits a day. The skywalk is similar to the one in America's Grand Canyon - both are made of transparent glass to provide stunning views to visitors.[2] 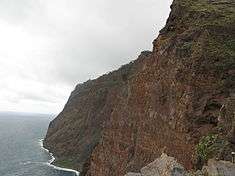 The cliff face of Cabo Girão 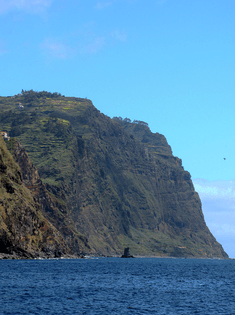 It is situated less than two kilometres west from the centre of Câmara de Lobos, between the parishes of Quinta Grande and Câmara de Lobos. A diamond-shaped sea-cliff escarpment from 560 metres (1,840 ft) to 589 metres (1,932 ft) above sea level, Cabo Girão lies between two river-valleys that flow into the Atlantic Ocean. The escarpment/cliffs extend approximately three kilometres between the urban sprawl of Câmara de Lobos to the east and the river-valley of Quinta Grande in the west.

There are cultivated wave-cut platforms (Fajãs de Cabo Girão) located below the sheer cliffs, which at one time only accessible by boat. In August 2003, a cable car was installed on the slope of the cliff so farmers can reach these low-lying fields.

Apart from the communications towers that are installed on Cabo Girão, the Cape is noted for the Chapel of Nossa Senhora da Fátima (English: Our Lady of Fátima),[3] which was built in 1974 to replace a much smaller chapel built in 1931.