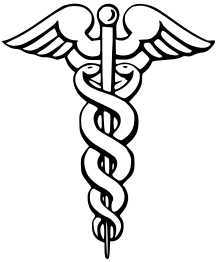 Modern depiction of the caduceus as the symbol of commerce

The caduceus (☤; /kəˈduːsiːəs/ or /kəˈdjuːʃəs/; from Greek κηρύκειον kērukeion "herald's staff")[2] is the staff carried by Hermes Trismegistus in Greco-Egyptian mythology and Hermes in Greek mythology. The same staff was also borne by heralds in general, for example by Iris, the messenger of Hera. It is a short staff entwined by two serpents, sometimes surmounted by wings. In Roman iconography, it was often depicted being carried in the left hand of Mercury, the messenger of the gods, guide of the dead and protector of merchants, shepherds, gamblers, liars, and thieves.[3]

Some accounts suggest that the oldest known imagery of the caduceus have their roots in a Mesopotamian origin with the Sumerian god Ningishzida whose symbol, a staff with two snakes intertwined around it, dates back to 4000 B.C. to 3000 B.C.[4]

As a symbolic object, it represents Hermes (or the Roman Mercury), and by extension trades, occupations, or undertakings associated with the god. In later Antiquity, the caduceus provided the basis for the astrological symbol representing the planet Mercury. Thus, through its use in astrology and alchemy, it has come to denote the elemental metal of the same name. It is said the wand would wake the sleeping and send the awake to sleep. If applied to the dying, their death was gentle; if applied to the dead, they returned to life.[5]

By extension of its association with Mercury and Hermes, the caduceus is also a recognized symbol of commerce and negotiation, two realms in which balanced exchange and reciprocity are recognized as ideals.[6][7] This association is ancient, and consistent from the Classical period to modern times.[8] The caduceus is also used as a symbol representing printing, again by extension of the attributes of Mercury (in this case associated with writing and eloquence).

The caduceus is often incorrectly used, particularly in North America, as a symbol of healthcare organizations and medical practice, due to confusion with the traditional medical symbol, the rod of Asclepius, which has only one snake and is never depicted with wings.

Hermes hastens bearing his kerukeion, on an Attic lekythos, ca 480–470 BC, attributed to the Tithonos Painter 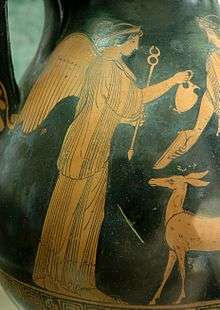 Iris with the caduceus in detail from an Attic red-figure pelike, middle of 5th century BC – Agrigento, Sicilia

The term kerukeion denoted any herald's staff, not necessarily associated with Hermes in particular.[9]

In his study of the cult of Hermes, Lewis Richard Farnell (1909) assumed that the two snakes had simply developed out of ornaments of the shepherd's crook used by heralds as their staff.[10] This view has been rejected by later authors pointing to parallel iconography in the Ancient Near East. It has been argued that the staff or wand entwined by two snakes was itself representing a god in the pre-anthropomorphic era. Like the herm or priapus, it would thus be a predecessor of the anthropomorphic Hermes of the classical era.[11]

William Hayes Ward (1910) discovered that symbols similar to the classical caduceus sometimes appeared on Mesopotamian cylinder seals. He suggested the symbol originated some time between 3000 and 4000 BCE, and that it might have been the source of the Greek caduceus.[12] A.L. Frothingham incorporated Dr. Ward's research into his own work, published in 1916, in which he suggested that the prototype of Hermes was an "Oriental deity of Babylonian extraction" represented in his earliest form as a snake god. From this perspective, the caduceus was originally representative of Hermes himself, in his early form as the Underworld god Ningishzida, "messenger" of the "Earth Mother".[13] The caduceus is mentioned in passing by Walter Burkert[14] as "really the image of copulating snakes taken over from Ancient Near Eastern tradition".

In Egyptian iconography, the Djed pillar is depicted as containing a snake in a frieze of the Dendera Temple complex.

The Homeric hymn to Hermes relates how Hermes offered his lyre fashioned from a tortoise shell as compensation for the cattle he stole from his half brother Apollo. Apollo in return gave Hermes the caduceus as a gesture of friendship.[15] The association with the serpent thus connects Hermes to Apollo, as later the serpent was associated with Asclepius, the "son of Apollo".[16] 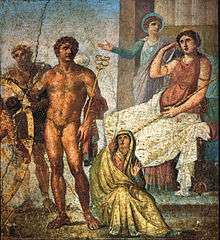 Punishment of Ixion: in the center is Mercury holding the caduceus and on the right Juno sits on her throne. Behind her Iris stands and gestures. On the left is Vulcan (blond figure) standing behind the wheel, manning it, with Ixion already tied to it. Nephele sits at Mercury's feet; a Roman fresco from the eastern wall of the triclinium in the House of the Vettii, Pompeii, Fourth Style (60-79 AD).

The association of Apollo with the serpent is a continuation of the older Indo-European dragon-slayer motif. Wilhelm Heinrich Roscher (1913) pointed out that the serpent as an attribute of both Hermes and Asclepius is a variant of the "pre-historic semi-chthonic serpent hero known at Delphi as Python", who in classical mythology is slain by Apollo.[17]

One Greek myth of origin of the caduceus is part of the story of Tiresias,[18] who found two snakes copulating and killed the female with his staff. Tiresias was immediately turned into a woman, and so remained until he was able to repeat the act with the male snake seven years later. This staff later came into the possession of the god Hermes, along with its transformative powers.

Another myth suggests that Hermes (or Mercury) saw two serpents entwined in mortal combat. Separating them with his wand he brought about peace between them, and as a result the wand with two serpents came to be seen as a sign of peace.[19]

In Rome, Livy refers to the caduceator who negotiated peace arrangements under the diplomatic protection of the caduceus he carried.[20]

In some vase paintings ancient depictions of the Greek kerukeion are somewhat different from the commonly seen modern representation. These representations feature the two snakes atop the staff (or rod), crossed to create a circle with the heads of the snakes resembling horns. This old graphic form, with an additional crossbar to the staff, seems to have provided the basis for the graphical sign of Mercury (☿) used in Greek astrology from Late Antiquity.[21]

Caduceus on the coat of arms of Jyväskylä, Finland.

Caduceus is encoded in Unicode at code point U+2624: ☤.

A simplified variant of the caduceus is to be found in dictionaries, indicating a “commercial term” entirely in keeping with the association of Hermes with commerce. In this form the staff is often depicted with two winglets attached and the snakes are omitted (or reduced to a small ring in the middle).[22] The Customs Service of the former German Democratic Republic employed the caduceus, bringing its implied associations with thresholds, translators, and commerce, in the service medals they issued their staff. The caduceus is also the symbol of the Customs Agency of Bulgaria.

Confusion with Rod of Asclepius

Main article: Caduceus as a symbol of medicine

The US Army Medical Corps Branch Plaque. The adoption, in 1902, of the caduceus for US Army medical officer uniforms popularized the erroneous use of the symbol throughout the medical field in the United States.

It is relatively common, especially in the United States, to find the caduceus, with its two snakes and wings, used as a symbol of medicine instead of the correct Rod of Asclepius, with only a single snake. This usage is erroneous, popularised largely as a result of the adoption of the caduceus as its insignia by the U.S. Army Medical Corps in 1902 at the insistence of a single officer (though there are conflicting claims as to whether this was Capt. Frederick P. Reynolds or Col. John R. van Hoff).[23][24]

The rod of Asclepius is the dominant symbol for professional healthcare associations in the United States. One survey found that 62% of professional healthcare associations used the rod of Asclepius as their symbol.[25] The same survey found that 76% of commercial healthcare organizations used the Caduceus symbol. The author of the study suggests the difference exists because professional associations are more likely to have a real understanding of the two symbols, whereas commercial organizations are more likely to be concerned with the visual impact a symbol will have in selling their products.

The initial errors leading to its adoption and the continuing confusion it generates are well known to medical historians. The long-standing and abundantly attested historical associations of the caduceus with commerce are considered by many to be inappropriate in a symbol used by those engaged in the healing arts.[24] This has occasioned significant criticism of the use of the caduceus in a medical context.