Campus carry in the United States 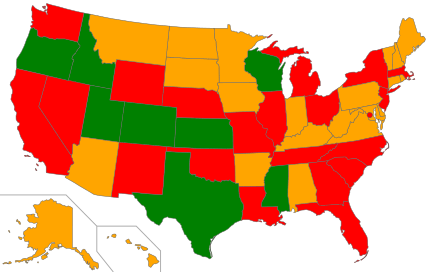 There are three different forms of Campus carry that states enact: Mandatory, Institutional, or Non-permissive.

Mandatory refers to a law or court decision which requires a publicly funded institution to generally allow firearms on campus, though some locations may be exempted depending on the school policy (e.g. a secure area, at a sporting event, etc.). Restricted areas will vary by state and individual school; refer to your school's specific policy for details. Some states require the firearm to be concealed (e.g. Texas) while others allow concealed or open carry (e.g. Utah).

Institutional refers to the decision of each institution to determine whether to allow firearms on campus or not. School firearm policies generally do not have the force of law. The majority of institutions in these states opt to ban guns with a few exceptions (e.g. Liberty University).

Non-Permissive refers to the prohibition of firearms on any institutional property by law.

For full details for each state, including references to state laws and campus policies, see references.[1][2][3]