Capital University is a private accredited liberal arts and research university in Bexley, a suburb of Columbus, Ohio. Capital was founded originally as the Theological Seminary of the Evangelical Lutheran Synod of Ohio in 1830, and later was associated with that synod's successor, the American Lutheran Church.[4] The university has undergraduate and graduate programs, as well as a law school.[5] Capital University is the oldest university in Central Ohio and is one of the oldest and largest Lutheran-affiliated universities in North America.[6]

According to an economic impact study, Capital University provides nearly $162 million in earnings, employment, and output to the eight county Columbus metro area based on 2011-12 data.[7] 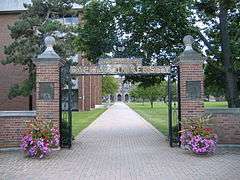 Capital University was founded on June 3, 1830 as the "Theological Seminary of the Evangelical Lutheran Synod of Ohio" in nearby Canton, Ohio,[4] 40 years before what would become The Ohio State University, securing its title as the oldest university in Central Ohio. It was renamed as Capital University on March 2, 1850, when the Seminary was reformed as The Evangelical Lutheran Theological Seminary of Columbus, Ohio, (E.L.T.S.), (and occasionally still known by the misnomer of "Capital Seminary") when the denomination was renamed as the Evangelical Lutheran Joint Synod of Ohio and Other States and grew into a nationwide church body. In 1930, the Joint Synod was merged with two other smaller German language groups, the Iowa Synod (formed 1854) and the Buffalo Synod (founded 1845) into a major nationwide grouping entitled the American Lutheran Church (ALC), headquartered in Columbus. The ALC existed only three decades, until 1960, when it in turn participated in a larger merger with several other groups of Lutherans in the Norwegian, Danish and Swedish traditions and was renamed The American Lutheran Church. The second ALC lasted until the formation of the current Evangelical Lutheran Church in America (ELCA) in 1988, with offices in Chicago, Illinois.

The neighboring E.L.T.S. in Bexley merged with the theological department known as Hamma Divinity School of nearby Wittenberg University in Springfield, Ohio in 1978, and reopened on the Columbus campus as "Trinity Lutheran Seminary", where it continues today as a theological seminary of the ELCA.[4]

The University moved to downtown Columbus in 1832, but eventually moved its main campus to the rural peripheral of the state capital in the community of Bexley. This rural area has since developed into an upscale suburb. Capital University's educational mission is based on Lutheran values of free inquiry, critical thinking, and leadership. A current motto used at the school is "Ask. Think. Lead", a continuing reminder of its educational mission.

In May 2004, the University received approval to close Mound Street between College Avenue and Pleasant Ridge Avenue from the city of Bexley. The University in 2006 constructed a pedestrian mall on the closed portion of Mound Street which included parking, improved lighting, benches, and landscaping. The 2.5 million dollar project unified the northern and southern portions of campus.[8]

On April 20, 2015, University President Denvy A. Bowman announced his intention to retire as president effective July 1, 2016, ending his ten-year tenure as president.[1]

On February 9, 2016, Capital announced Dr. Elizabeth L. Paul as the university's president elect. She is the 16th president of Capital and is the first woman to hold the position at the university. Dr. Paul comes to Capital after serving as provost at Stetson University in Florida.[9]

Capital is accredited by The Higher Learning Commission and is a member of the North Central Association of Colleges and Schools.[10]

Capital University has more than 60 majors and 51 minors to choose from. Some majors include education, nursing, economics, criminology, athletic training, business, accounting, chemistry and many others. Capital University has a strong and well-established music program with renowned faculty including James Swearingen and diverse majors such as Music Education, Performance Majors, Music Technology (either a Bachelor of Arts or Bachelor of Music), and Music Industry.[13]

On June 8, 2015 the Board of Trustees approved the demolition of Loy Hall to proceed with the construction of a Convergent Media Center. The project is estimated to cost approximately 16 million dollars with an anticipated completion date in August 2016.[14] The building will be the new home for Cap TV, WXCU Radio, The Chimes, Conservatory rehearsal space, as well as conference rooms and classrooms. The original hardwood floor of Loy Hall will be repurposed into tables in the new building. Beginning June 23, 2015 with the start of demolition, the project can be seen via a webcam on Capital's website.

Capital University's music program is well-respected in the music community. Consisting of both traditional and contemporary tracks, legendary faculty member Ray Eubanks started the jazz program and the music industry programs, which were some of the first in the nation. Currently, the largest degree concentration within the Conservatory is the Music Technology program, consisting of two tracks authored by Dr. Rocky J. Reuter, who also created the composition degree, the MIDI Band (an all-electronic live ensemble that has toured throughout the mid-west and eastern US), Ensemble Now (an improvisational-based contemporary music ensemble) and NOW MUSIC Festival, an annual celebration of contemporary music. The Chapel Choir has performed around Ohio and the world, including venues such as Carnegie Hall. The annual Christmas Festival at Capital, led by all the choral ensembles (the Capital Chordsmen, Women's Chorus, Choral Union, and Chapel Choir), is a popular local event and community institution. Recently, the university appointed its first female Assistant Dean of the Conservatory of Music.

The campus radio station, WXCU Radio, is entirely student-run and managed. Starting in 2007, the radio station began streaming online only with an alternative and indie rock format. Students have the opportunity to host their own radio show and interview nationally touring acts.[19] Additionally, the station hosts several concerts[20] and also supports the efforts of other groups campus-wide. Participation can be either extra-curricular for Pre-Professional credits. The station takes music submissions and frequently features music produced by students.

During the summer of 2013 the Harry C. Moores Campus Center underwent a multimillion-dollar renovation. Capital University's Student Government rededicated the building as the 'Harry C. Moores Student Union' in the fall of 2013. Capital's Barnes & Noble bookstore is located on the first floor of the Union . The Student Union is also home to the campus mail room and the main dining facilities for Capital University. [21]

The Capital University Blackmore Library is a four-floor structure. Computers are located on the first three floors for use, with only one on the third floor. The third floor contains many articles and much of the University's historic data is located there. The fourth floor is the home to the Schumacher Gallery, which houses a large art collection on campus. The second floor has a large collection of music, including a vinyl section. Constructed in 1969 and dedicated in March 1971, the library now contains more than 300,000 articles of media. The library was named in 1998 for Josiah Blackmore, a well-known legal scholar and former president of the University. The library was named in honor of his achievements as the 12th president of Capital University.[22] The first and second floors of Blackmore Library were renovated in Summer 2012.

A piece of the Berlin Wall is a popular attraction for visitors and incoming students. Obtained in 1992, the wall was given on long-term loan from Hansa Consulting, a German-based corporation. On one side is colorful graffiti written during the separation of East and West Berlin, while the other side is blank concrete revealing a few bullet holes, evidence of the confinement of East Berliners. Once housed in the University's library, the structure now stands outside behind the Huber Spielman Hall. The concrete wall weighs 2.8 tons.[23]

Capital University participates in numerous sports and plays within the Ohio Athletic Conference in the NCAA's Division III. The school's primary athletic rival is Otterbein University, in Westerville, Ohio. Under the name Capital Crusaders, the following teams and clubs compete on the varsity level:

Bernlor Stadium is home to the football team, men's and women's soccer teams, track team, and also to the men's and women's lacrosse teams. In 2011, Field turf was reinstalled to the field. The stadium does have a three lane track. The capacity is around 3,000 with seating and standing room. In fall of 2012, a new HD LCD scoreboard was revealed.[25] In October 2014, Capital was granted permission to install stadium lights and a new sound system at the stadium by the Bexley Planning Commission. This decision was upheld in January 2015, by the Bexley City Council after residents living near the stadium appealed the planning commission's decision.[26]

The Capital Center is a 126,000-square-foot recreational and athletic complex opened in 2001. Located inside is a weight room and cardio workout area open to students. The facility has an indoor track as well. The basketball teams as well as the volleyball team use the main gym inside the complex for their home games. Some classes are also held inside the Capital Center. The Capital Center is connected to Bernlor Stadium.[27]

Clowson Field is home to the baseball and softball teams.[28] The field is located just a short drive from campus off of South Nelson Road.

Capital has many Alumni living in central Ohio and throughout the United States.