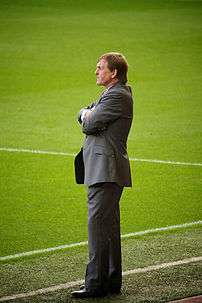 Kenny Dalglish temporarily served as the caretaker manager of Liverpool in 2011, following the sacking of Roy Hodgson. He was eventually promoted to full-time manager.

In association footballing terms, a caretaker manager is somebody who takes temporary charge of the management of a football club, usually when the regular manager is dismissed, or leaves for a different club. However, a caretaker may also be appointed if the regular manager is ill or unable to attend to their usual duties. Caretaker managers are normally appointed at short notice from within the club, usually the assistant manager, a senior coach, or an experienced player. In other sports, the term "interim manager" is more commonly used.

Famous examples include long-standing Arsenal assistant manager Stewart Houston, who stepped in after George Graham was abruptly sacked in the middle of the 1994–95 season and guided the club to the 1995 European Cup Winners' Cup Final. Tony Barton was appointed manager of Aston Villa after the departure of Ron Saunders and led the club to win the 1982 European Cup after only three months in charge. Club Director Trevor Brooking was appointed as caretaker manager of West Ham United following Glenn Roeder's illness at the end of the 2002–03 season, then again following his dismissal early in the 2003–04 season.

If a caretaker proves to be particularly successful during their spell in charge, they are sometimes given the manager's job full-time. Glenn Roeder was appointed full-time manager of Newcastle United after having taken over as caretaker following Graeme Souness' dismissal in 2006. This also occurred when Ricky Sbragia got the Sunderland job permanently after Roy Keane's resignation in November 2008 but he resigned himself at the end of the season 2008–09. This also happened in the 2010–11 Premier League; on 8 January 2011, Roy Hodgson was sacked by Liverpool after a run of poor results, and with Liverpool languishing in 12th place. Kenny Dalglish was appointed the caretaker manager of Liverpool for the remainder of the season. After an impressive run of results, which saw Liverpool rise to 6th on the table, Dalglish was appointed the full-time manager of Liverpool, on a three-year contract.

In Norway, a notable example occurred in 2006 when Rosenborg BK manager Per-Mathias Høgmo announced he was taking a leave of absence in mid-season, citing health concerns. At the time, Rosenborg were ten points behind leaders SK Brann. His assistant Knut Tørum was appointed on an interim basis, and proceeded to lead Rosenborg to a furious comeback, clinching the league title with one match to spare. Høgmo announced his resignation two days after Rosenborg clinched, and Tørum was named permanent manager after the season.

On the other hand, Tony Parkes was named caretaker manager of Blackburn Rovers on six separate occasions between 1986 and 2004, without ever being given the role in a full-time capacity. He is still yet to be given a full-time managerial role.

In November 2007, Sandy Stewart led St Johnstone to victory in the final of the Scottish Challenge Cup in his only game in charge as caretaker manager.[1]

In the 2007–08 season, Cevat Güler won Süper Lig as Galatasaray's caretaker manager. He was in charge for the last five matches of the season due to Karl Heinz Feldkamp's resignation.

In the 2007 Hazfi Cup final, Sepahan's head coach, Luka Bonačić had travelled to his country, Croatia for personal reasons and was unavailable to manage the team in the second leg. Mansour Ebrahimzadeh who was assistant to Bonačić served as caretaker manager for that match. Sepahan won the match and the title.

Guus Hiddink was caretaker manager of Chelsea in 2009, leading his team to the semi-final of the UEFA Champions League where they shut out FC Barcelona at Camp Nou and tied them back at Stamford Bridge (the latter being a very controversial game, the match official being Tom Henning Øvrebø, with Chelsea eliminated on away goals), and finished off his tenure with the team as they won the FA Cup The club was reported happy to have Hiddink as manager even on a temporary basis.[2]

Roberto Di Matteo won the Champions League and FA Cup as caretaker manager of Chelsea in 2012, leading to him being appointed permanent manager on a two-year contract. He was sacked a few months into the new season,[3] being replaced by another caretaker manager, Rafael Benítez,[4] who led his team to victory in the Europa League, as well as guiding the team to a third-place finish in the league,[5] thus ensuring direct qualification for next year's Champions League. Benítez was not offered a contract as permanent manager, instead being replaced by José Mourinho who went back to Chelsea for a second term.[6]