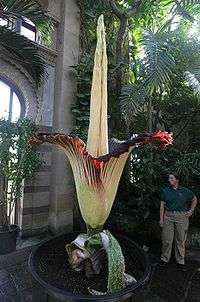 Carrion flowers, also known as corpse flowers or stinking flowers, are flowers that emit an odor that smells like rotting flesh. Carrion flowers attract mostly scavenging flies and beetles as pollinators. Some species may trap the insects temporarily to ensure the gathering and transfer of pollen.

Many plants in the genus Amorphophallus (family Araceae) are known as carrion flowers. Titan arum (Amorphophallus titanum), which has the world's largest flower head, is also called "carrion flower". Rather than a single flower, the titan arum presents an inflorescence or compound flower composed of a spadix or stalk of small and anatomically reduced male and female flowers, surrounded by a spathe that resembles a single giant petal. This plant has a mechanism to heat up the spadix enhancing the emission of the strong odor of decaying meat to attract its pollinators, carrion-eating beetles and "flesh flies" (family Sarcophagidae). It was first discovered in 1878 in Sumatra.[1]

Flowers of plants in the genus Rafflesia (family Rafflesiaceae) emit an odor similar to that of decaying meat. This odor attracts the flies that pollinate the plant. The world's largest single bloom is R. arnoldii. This rare flower is found in the rainforests of Borneo and Sumatra. It can grow to be 3 feet across and weigh up to 15 pounds. R. arnoldii is a parasitic plant on Tetrastigma vine, which grows only in primary rainforests. It has no visible leaves, roots, or stem. It does not photosynthesize, but rather uses the host plant to obtain water and nutrients.

House fly landing on a flower of Stapelia lepida.

Plants in the genus Stapelia are also called "carrion flowers". They are small, spineless, cactus-like succulent plants. Most species are native to South Africa, and are grown as potted plants elsewhere. The flowers of all species are hairy to varying degrees and generate the odor of rotten flesh. The color of the flowers also mimics rotting meat. This attracts scavenging flies, for pollination. The flowers in some species can be very large, notably Stapelia gigantea can reach 30 cm (12 inches) in diameter.

In North America, the herbaceous vines of the genus Smilax are known as carrion flowers. These plants have a cluster of small greenish flowers. The most familiar member of this groups is Smilax herbacea. These plants are sometimes placed in the genus Nemexia.

Orchids of the genus Bulbophyllum produce flowers which smell of rotting meat. The flowers produce various odors resembling sap, urine, blood, dung, carrion, and, in some species, fragrant fruity aromas. Most are fly-pollinated, and attract hordes of flies. Bulbophyllum beccarii in bloom has been likened to smelling like a herd of dead elephants as well as Bulbophyllum fletcherianum and Bulbophyllum phalaenopsis. They are variously described as making it difficult to walk into a greenhouse in which they are being cultivated if the plants are in bloom because of their overpowering floral odors. [2]

The sources of the flowers' unique scent are not fully identified, partly due to the extremely low concentration of the compounds (5 to 10 parts per billion). Dimethyl sulfides, including disulfide and trisulfide have been detected in Amorphophallus.[3]

Other plants with carrion-scented flowers