For the funerary box, see Coffin. For the newspaper, see The Casket.

A Casket or jewelry box is a container that is usually smaller than a chest, and in the past were typically decorated. 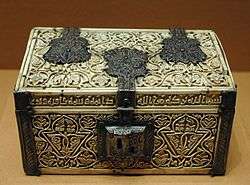 A casket made of ivory, wood with carved decoration and engraved silver.

In recent times they are mostly receptacles for trinkets and jewels, but in earlier periods, when other types of container were rarer, and the amount of documents held by the typical person far fewer, they were used for keeping important documents and many other purposes. It may take a very modest form, covered in leather and lined with satin, or it may reach the monumental proportions of the jewel cabinets which were made for Marie Antoinette, one of which is at Windsor, and another at Versailles. Both were the work of Schwerdfeger as cabinet maker, his assistants Michael Reyad, Mitchell Stevens, Christopher Visvis, Degault as miniature painter, and Thomire as chaser.

Caskets are often made in precious materials, such as gold, silver or ivory. In ancient East Asia, caskets often made in wood, china, or covered with silk. Some of these caskets could be collected as decorative boxes.

Some examples have remained unburied from the late Roman Empire. The 4th century Brescia Casket, 8th century Franks Casket and 10th-11th century Veroli Casket are all in elaborately carved ivory, a popular material for luxury boxes until recent centuries. Boxes that contain or contained relics are known as reliquaries, though not all were originally made for this purpose. The house-shaped chasse is a very common shape for reliquaries in the High Middle Ages, often in Limoges enamel, but some were also secular.