Center of gravity of an aircraft

Ballast
Ballast is removable or permanently installed weight in an aircraft used to bring the center of gravity into the allowable range.

Center-of-Gravity Limits
Center of gravity (CG) limits are specified longitudinal (forward and aft) and/or lateral (left and right) limits within which the aircraft's center of gravity must be located during flight. The CG limits are indicated in the airplane flight manual. The area between the limits is called the CG range of the aircraft.

Weight and Balance
When the weight of the aircraft is at or below the allowable limit(s) for its configuration (parked, ground movement, take-off, landing, etc.) and its center of gravity is within the allowable range, and both will remain so for the duration of the flight, the aircraft is said to be within weight and balance. Different maximum weights may be defined for different situations; for example, large aircraft may have maximum landing weights that are lower than maximum take-off weights (because some weight is expected to be lost as fuel is burned during the flight). The center of gravity may change over the duration of the flight as the aircraft's weight changes due to fuel burn or by passengers moving forward or aft in the cabin.

Moment
The moment is the moment of force, or torque, that results from an object’s weight acting through an arc that is centered on the zero point of the reference datum distance. Moment is also referred to as the tendency of an object to rotate or pivot about a point (the zero point of the datum, in this case). The further an object is from this point, the greater the force it exerts. Moment is calculated by multiplying the weight of an object by its arm.

Mean Aerodynamic Chord (MAC)
A specific chord line of a tapered wing. At the mean aerodynamic chord, the center of pressure has the same aerodynamic force, position, and area as it does on the rest of the wing. The MAC represents the width of an equivalent rectangular wing in given conditions. On some aircraft, the center of gravity is expressed as a percentage of the length of the MAC. In order to make such a calculation, the position of the leading edge of the MAC must be known ahead of time. This position is defined as a distance from the reference datum and is found in the aircraft's flight manual and also on the aircraft's type certificate data sheet. If a general MAC is not given but a LeMAC (leading edge mean aerodynamic chord) and a TeMAC (trailing edge mean aerodynamic chord) are given (both of which would be referenced as an arm measured out from the datum line) then your MAC can be found by finding the difference between your LeMAC and your TeMAC.

Center of gravity (CG) is calculated as follows:

The weight, moment and arm values of fixed items on the aircraft (i.e. engines, wings, electronic components) do not change and are provided by the manufacturer on the Aircraft Equipment List. The manufacturer also provides information facilitating the calculation of moments for fuel loads. Removable weight items (i.e. crew members, passengers, baggage) must be properly accounted for in the weight and CG calculation by the aircraft operator.

In larger aircraft, weight and balance is often expressed as a percentage of mean aerodynamic chord, or MAC. For example, assume the leading edge of the MAC is 62 inches aft of the datum. Therefore, the CG calculated above lies 32 inches aft of the leading edge of the MAC. If the MAC is 80 inches in length, the percentage of MAC is 32 / 80 = 40%. If the allowable limits were 15% to 35%, the aircraft would not be properly loaded.

Center of gravity out of range

When the fore-aft center of gravity (CG) is out of range serious aircraft control problems occur. The fore-aft CG affects longitudinal stability of the aircraft, with the stability increasing as the CG moves forward, and stability decreasing as the CG moves aft. With a forward CG position, although the stability of the aircraft increases, the elevator control authority is reduced in the capability of raising the nose of the aircraft. This can cause a serious condition during the landing flare when the nose cannot be raised sufficiently to slow the aircraft. An aft CG position creates severe handling problems due to the reduced pitch stability and increased elevator control sensitivity, with potential loss of aircraft control. Because the burning of fuel gradually produces a loss of weight and possibly a shift in the CG, it is possible for an aircraft to take off with the CG within normal operating range, and yet later develop an imbalance that results in control problems. Calculations of CG must take this into account (often part of this is calculated in advance by the manufacturer and incorporated into CG limits).

We want to move the CG 1in using a 100lb bag in the baggage compartment.

Reworking the problem with 100lbs moved 16in forward to 68in moves CG 1-in.

Weight out of range

Few aircraft impose a minimum weight for flight (although a minimum pilot weight is often specified), but all impose a maximum weight. If the maximum weight is exceeded, the aircraft may not be able to achieve or sustain controlled, level flight. Excessive take-off weight may make it impossible to take off within available runway lengths, or it may completely prevent take-off. Excessive weight in flight may make climbing beyond a certain altitude difficult or impossible, or it may make it impossible to maintain an altitude.

Incorrect weight and balance in helicopters

The center of gravity is even more critical for helicopters than it is for fixed-wing aircraft (weight issues remain the same). As with fixed-wing aircraft, a helicopter may be properly loaded for takeoff, but near the end of a long flight when the fuel tanks are almost empty, the CG may have shifted enough for the helicopter to be out of balance laterally or longitudinally.[1] For helicopters with a single main rotor, the CG is usually close to the main rotor mast. Improper balance of a helicopter’s load can result in serious control problems. In addition to making a helicopter difficult to control, an out-of-balance loading condition also decreases maneuverability since cyclic control is less effective in the direction opposite to the CG location.

The pilot tries to perfectly balance a helicopter so that the fuselage remains horizontal in hovering flight, with no cyclic pitch control needed except for wind correction. Since the fuselage acts as a pendulum suspended from the rotor, changing the center of gravity changes the angle at which the aircraft hangs from the rotor. When the center of gravity is directly under the rotor mast, the helicopter hangs horizontal; if the CG is too far forward of the mast, the helicopter hangs with its nose tilted down; if the CG is too far aft of the mast, the nose tilts up.

A forward CG will not be as obvious when hovering into a strong wind, since less rearward cyclic displacement is required than when hovering with no wind. When determining whether a critical balance condition exists, it is essential to consider the wind velocity and its relation to the rearward displacement of the cyclic control.

Without proper ballast in the cockpit, exceeding the aft CG may occur when:

An aft CG condition can be recognized by the pilot when coming to a hover following a vertical takeoff. The helicopter will have a tail-low attitude, and the pilot will need excessive forward displacement of cyclic control to maintain a hover in a no-wind condition. If there is a wind, the pilot needs even greater forward cyclic. If flight is continued in this condition, the pilot may find it impossible to fly in the upper allowable airspeed range due to inadequate forward cyclic authority to maintain a nose-low attitude. In addition, with an extreme aft CG, gusty or rough air could accelerate the helicopter to a speed faster than that produced with full forward cyclic control. In this case, dissymmetry of lift and blade flapping could cause the rotor disc to tilt aft. With full forward cyclic control already applied, the rotor disc might not be able to be lowered, resulting in possible loss of control, or the rotor blades striking the tail boom.

In fixed-wing aircraft, lateral balance is often much less critical than fore-aft balance, simply because most mass in the aircraft is located very close to its center. An exception is fuel, which may be loaded into the wings, but since fuel loads are usually symmetrical about the axis of the aircraft, lateral balance is not usually affected. The lateral center of gravity may become important if the fuel is not loaded evenly into tanks on both sides of the aircraft, or (in the case of small aircraft) when passengers are predominantly on one side of the aircraft (such as a pilot flying alone in a small aircraft). Small lateral deviations of CG that are within limits may cause an annoying roll tendency that pilots must compensate for, but they are not dangerous as long as the CG remains within limits for the duration of the flight.

For most helicopters, it is usually not necessary to determine the lateral CG for normal flight instruction and passenger flights. This is because helicopter cabins are relatively narrow and most optional equipment is located near the center line. However, some helicopter manuals specify the seat from which solo flight must be conducted. In addition, if there is an unusual situation, such as a heavy pilot and a full load of fuel on one side of the helicopter, which could affect the lateral CG, its position should be checked against the CG envelope. If carrying external loads in a position that requires large lateral cyclic control displacement to maintain level flight, fore and aft cyclic effectiveness could be dramatically limited.

Many large transport-category aircraft are able to take-off at a greater weight than they can land. This is possible because the weight of fuel that the wings can support along their span in flight, or when parked or taxiing on the ground, is greater than they can tolerate during the stress of landing and touchdown, when the support is not distributed along the span of the wing.

In some cases, an aircraft may take off overweight deliberately. An example might be an aircraft being ferried over a very long distance with extra fuel aboard. An overweight take-off typically requires an exceptionally long runway. Overweight operations are not permitted with passengers aboard.

Many smaller aircraft have a maximum landing weight that is the same as the maximum take-off weight, in which case issues of overweight landing due to excess fuel being on board cannot arise. 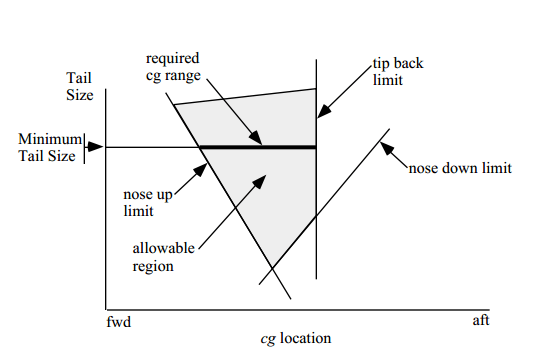 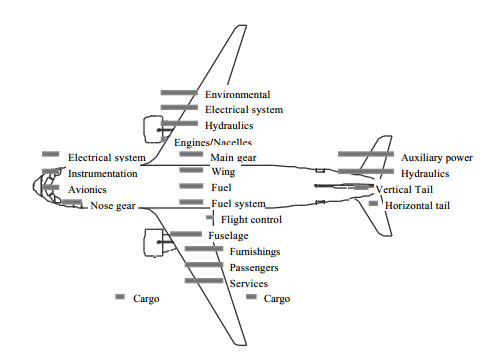 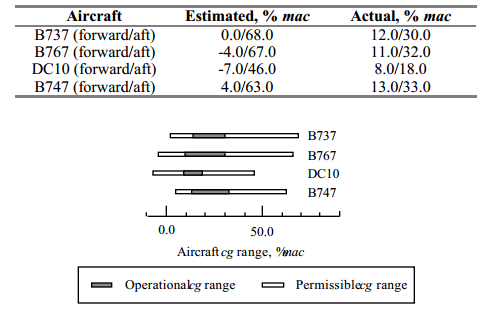