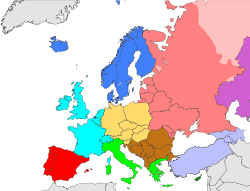 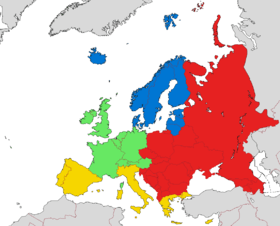 Sub-regions of Europe according to Eurovoc 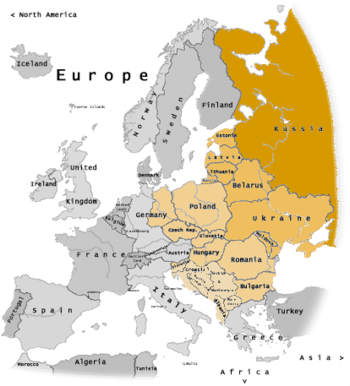 Central and Eastern Europe, abbreviated CEE, is a generic term for the group of countries in Central Europe, Southeast Europe, Northern Europe, and Eastern Europe, usually meaning former communist states in Europe. It is in use after the collapse of the Iron Curtain in 1989–90. In scholarly literature the abbreviations CEE or CEEC are often used for this concept.[1][2][3]

The term CEE includes all the Eastern bloc countries west of the post-World War II border with the former Soviet Union, the independent states in former Yugoslavia (which were not considered part of the Eastern bloc), and the three Baltic states – Estonia, Latvia, Lithuania – that chose not to join the CIS with the other 12 former republics of the USSR. The transition countries in Europe are thus classified today into two political-economic entities: CEE and CIS. The CEE countries are further subdivided by their accession status to the European Union (EU): the eight first-wave accession countries that joined the EU on 1 May 2004 (Estonia, Latvia, Lithuania, Czech Republic, Slovakia, Poland, Hungary, and Slovenia), the two second-wave accession countries that joined on 1 January 2007 (Romania and Bulgaria) and the third-wave accession country that joined on 1 July 2013 (Croatia). According to the World Bank, "the transition is over" for the 10 countries that joined the EU in 2004 and 2007.[4] It can be also understood as all countries of the Eastern Bloc.[5]

CEE includes the following former socialist countries, which extend east from the border of Germany and south from the Baltic Sea to the border with Greece:

Other former Communist countries in Europe, which are members and associates of the CIS are sometimes included in CEE:[7][8][9][10]