Charles Albert (Italian: Carlo Alberto I; 2 October 1798 – 28 July 1849), also called "The Hesitant" for his variable political lines, was the King of Sardinia from 1831 to 1849. His name is bound up with the first Italian constitution, the Albertine Statute, and the First Italian War of Independence (1848–1849). He abdicated after his forces were defeated by the Imperial Austrian army at the Battle of Novara (1849), and died in exile soon thereafter.

An American historian says he was a:

A strange pathetic being, at odds with himself and his time; compounded of monkish asceticism and soldierly courage; autocratic, but irresolute; holding his honor dearer than his life, yet pursued through life by accusations of dishonor: such was Charles Albert, to whom when he had passed beyond the reach of their praises or their blame, his countrymen gave the epithet 'magnanimous'.[1]

He was born in Turin in October 1798, to Charles Emmanuel, Prince of Carignano and Maria Cristina of Saxony. His father was the great-great-great-grandson of Thomas Francis, Prince of Carignano, youngest legitimate son of Charles Emmanuel I, Duke of Savoy, and founder of the Carignano line of the House of Savoy. He was the third cousin once removed of Victor Amadeus III, and the next male-line heir after the three sons of Victor Amadeus. When Charles Albert was born in 1798, none of his cousins had a son, making him the likely eventual successor on the throne of Sardinia.

He was educated in the intellectually liberal atmosphere of Geneva, then in Paris during the First French Empire of Napoleon Bonaparte. Napoleon named him a lieutenant of dragoons in 1814. After the final fall of Napoleon the following year, Charles Albert returned to Turin. Two mentors were entrusted with countering the dangerous ideas about "national liberation" ("liberté, égalité, fraternité/liberty, equality, fraternity") Charles had learned in France. However, he continued to display some sympathies with the liberals. 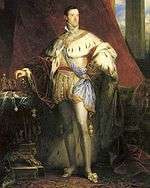 Charles Albert after his corornation, by Ferdinando Cavalleri (1831).

In 1821, as regent for the Kingdom in the absence of the new king, Charles Felix (then in Modena), he conceded a "constitution" that was soon disavowed by the king. Charles Felix sent him to Spain, to serve with the French army that King Louis XVIII of France sent to suppress the liberal revolution there and restore Ferdinand VII. He distinguished himself at the Battle of Trocadero in 1823, which gained him the favour of the leading conservative European power, the Austrian Empire, and also of King Charles X of France (who succeeded in 1824).

Coat of Arms of the Kings of Sardinia of the House of Savoy after 1815.

Charles Albert succeeded his cousin Charles Felix to the throne of Sardinia in 1831. Although an Italian patriot who allegedly was opposed to the Austrian hegemony and domination in Northern Italy, he put down Mazzini's 1833 conspiracy. He introduced a series of reforms following the many Revolutions of 1830 that convulsed Europe. He abolished domestic customs and trade barriers within the Kingdom, supported the arts and sciences, and promulgated the Statuto Albertino, a constitution. The Statuto was inspired by the earlier reforms of Louis Phillippe, the new moderate "King of the French", of the new kingdom of Belgium, and even later the reforms and parliamentary laws instituted in Great Britain.

During the Revolutions of 1848, he agreed to a constitutional regime which remained in place for the century that the Kingdom of Italy lasted. The same year he declared war on Austria. The small army of Piedmont was supported by volunteers from the whole of Italy. However, after his initial victories lost him the support of the Pope and the other Italian rulers, he was defeated at Custoza (24 July 1848), and forced to sign an armistice at Vigevano on 9 August. Under the increasing influence of the Republicans in Piedmont, he resumed the war the next year. But the Piedmontese were again defeated, at Novara. Rather than redrawing the Statute, he abdicated in favor of his son, Victor Emmanuel, and went into exile in Portugal.

He died at Porto the same year. His remains were transferred to the Royal Basilica of Superga, outside Turin.

Among the indigenous princes, the number one enemy of Italian freedom was and is Charles Albert. Italians should bear in mind and repeat every hour the old saying: "God watch over my friends, so that I can watch over my enemies". From Ferdinand of the House of Bourbon, there is nothing to fear; he has for a long time been discredited. Charles Albert on the other hand calls himself pompously the "liberator of Italy" while on the very people he is supposed to be liberating he imposes as a condition the yoke of his rule.[2]

In 1817, Charles Albert married his second cousin once removed, Maria Theresa of Austria, the youngest daughter of Ferdinand III, Grand Duke of Tuscany, and Princess Luisa of Naples and Sicily. The couple had the following children: