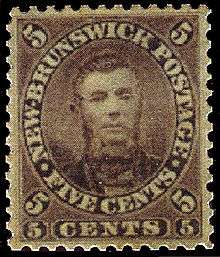 Charles Connell (1810 – June 28, 1873) was a Canadian politician, now remembered mainly for placing his image on a 5-cent postage stamp. Born in the then-British colony of Northampton, New Brunswick to a family of Loyalists who had fled the American Revolution, he entered politics in 1846, serving in the colony's Legislative Assembly and House of Assembly.

In 1858, Connell was appointed Postmaster General of the colony, at a time when increasing trade with the United States was forcing the British colonies to reconsider their currencies and institute a decimal system that would be more familiar to their American neighbors. New Brunswick adopted a decimal currency in 1859, and in the following year, Connell issued the first series of postage stamps in the new denomination. While few people had problems with the new currency, they were outraged that Connell chose to depict himself on the 5-cent stamp, instead of Queen Victoria. In an effort to stem the criticism and charges of extreme arrogance, he offered to buy up all the stamps and burned them publicly on the front lawn of his house. He also resigned his office as postmaster general.[1] It is unknown how many stamps survived, but they number no more than a few dozen and are now extremely rare.[2][3] Some counterfeits of the stamp exist also.[4]

Despite the episode, Connell continued to serve in the colonial legislature up until 1867. A member of the Executive Council of New Brunswick, he served as Surveyor General from July 10, 1866 to July 17, 1867.

An ardent supporter of Canadian Confederation, Connell was elected as a Member of Parliament representing the New Brunswick electoral district of Carleton in the first two Canadian parliaments.

On August 5, 1835, he married Anne Fisher, sister of Lewis P. Fisher. They had seven children, one of whom died young. She died on October 5, 1895 and is buried in the Old Methodist Cemetery in Woodstock, New Brunswick. His son George Heber went on to serve in the House of Commons.

His house, known as the Charles Connell House is located in Woodstock, New Brunswick, and is now a museum run by the Carleton County Historical Society.