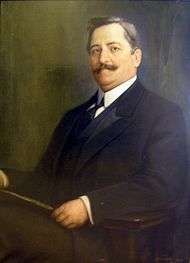 Portrait of Dabney by Lloyd Branson

He was born on June 19, 1855 in Hampden-Sydney, Virginia to Robert Lewis Dabney and Lavinia Morrison. He completed his B.S. at Hampden-Sydney College at age 17. He then attended the University of Virginia and graduated with an M.S. in chemistry in 1877.[2]

He taught for a year at Emory and Henry College. He attended the University of Goettingen in Germany in 1878 and graduated with a Ph.D. in 1880. He then returned to the United States. Dabney married Mary Chilton Brent, and began working as the director of the Agricultural Experiment Station in North Carolina and Professor of Chemistry at the University of North Carolina.[2]

Dabney served as ambassador to Brazil, in addition, he received 5 honorary doctorates, was elected a member of the Institute of Public Instruction in France, and was made chevalier of the Legion of Honor in 1915. Dabney is best known at NC State for assisting in writing the founding legislation of the University and for his lifelong efforts in the development of the South, especially North Carolina.

He became president of the University of Tennessee in 1887. As president he added six new four-year courses in science, and admitted the University's first female students.[2]

He became President of the University of Cincinnati on January 12, 1904 and served until 1920. In 1893 he was named to be Assistant Secretary of Agriculture by Grover Cleveland.[3]