For other uses, see Chastity (disambiguation). 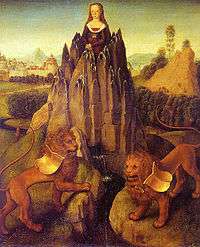 Allegory of chastity by Hans Memling

Chastity is sexual behavior of a man or woman that is acceptable to the moral standards and guidelines of their culture, civilization or religion. The term has become closely associated (and is often used interchangeably) with sexual abstinence, especially before marriage and outside marriage.[1][2]

The words "chaste" and "chastity" stem from the Latin adjective castus meaning "pure". The words entered the English language around the middle of the 13th century; at that time they meant slightly different things. "Chaste" meant "virtuous or pure from unlawful sexual intercourse" (referring to extramarital sex),[3][4] while "chastity" meant "virginity".[4][5] It was not until the late 16th century that the two words came to have the same basic meaning as a related adjective and noun.[3][4]

For Muslims and many Christians, acts of sexual nature are restricted to marriage. For unmarried persons, chastity is identified with sexual abstinence. Sexual acts outside or apart from marriage, such as adultery, fornication and prostitution, are considered sinful.

In many Christian traditions, chastity is synonymous with sexual purity. Chastity means not having any sexual relations before marriage. It also means fidelity to husband or wife during marriage. In Catholic morality, chastity is placed opposite the deadly sin of lust, and is classified as one of seven virtues. The moderation of sexual desires is required to be virtuous. Reason, will and desire can harmoniously work together to do what is good.

In marriage, the spouses commit to a lifelong relationship which excludes sexual intimacy with other persons. After marriage, a third form of chastity, often called "vidual chastity", is expected of a woman while she is in mourning for her late husband. For example, Anglican Bishop Jeremy Taylor defined 5 rules in Holy Living (1650), including abstaining from marrying "so long as she is with child by her former husband" and "within the year of mourning".[6]

Celibacy is required of monastics—monks, nuns and friars—even in a rare system of double cloisters, in which husbands could enter the (men's) monastery while their wives entered a (women's) sister monastery. Required celibacy among the clergy is a relatively recent practice: it became Church policy at the Second Lateran Council in 1139. It was not uniformly enforced among the clergy until 200 years later.[7] Eastern Catholic priests are permitted to be married, provided they are so before ordination and outside the monastic life.

Vows of chastity can also be taken by laypersons, either as part of an organised religious life (such as Roman Catholic Beguines and Beghards in the past) or on an individual basis: as a voluntary act of devotion, or as part of an ascetic lifestyle (often devoted to contemplation), or both.

The voluntary aspect has led it to being included among the main counsels of perfection.

Chastity is a central and pivotal concept in Roman Catholic praxis. Chastity's importance in traditional Roman Catholic teaching stems from the fact that it is regarded as essential in maintaining and cultivating the unity of body with spirit and thus the integrity of the human being.[8]:2332 It is also regarded as fundamental to the practise of the Catholic life because it involves an apprenticeship in self-mastery.[9]:2339 By attaining mastery over one's passions, reason, will and desire can harmoniously work together to do what is good.

In the LDS church, chastity is very important, quoting:

“Physical intimacy between husband and wife is a beautiful and sacred part of God’s plan for His children. It is an expression of love within marriage and allows husband and wife to participate in the creation of life. God has commanded that this sacred power be expressed only between a man and a woman who are legally married. The law of chastity applies to both men and women. It includes strict abstinence from sexual relations before marriage and complete fidelity and loyalty to one’s spouse after marriage.

“The law of chastity requires that sexual relations be reserved for marriage between a man and a woman.

“In addition to reserving sexual intimacy for marriage, we obey the law of chastity by controlling our thoughts, words, and actions. Jesus Christ taught,“Ye have heard that it was said by them of old time, Thou shalt not commit adultery: but I say unto you, That whosoever looketh on a woman to lust after her hath committed adultery with her already in his heart” (Matthew 5:27–28).”[10]

LDS teaching also includes that sexual expression within marriage is an important dimension of spousal bonding apart from, but not necessarily avoiding its procreative result.

Chastity is mandatory in Islam. Sex outside legitimacy is prohibited, for both men and women whether married or unmarried.

The most famous personal example of chastity in the Quran is Virgin Mary (Mariam) :

"And remember her, who guarded her chastity, We breathed into her of Our spirit and We made her and her son a sign for all peoples." (21 :91)

"She screened herself away from them (her people) then We sent to her Our angel, and he appeared before her as a man in all respects. She said: I seek refuge from you to God, Most Gracious (come not near) if you do fear God. He said I am only a messenger from your Lord (to announce) to you the gift of a holy son-She said: How shall I have a son, seeing that no man has touched me and I am not unchaste?" (19:17-20)

Extramarital sex is forbidden and the Quran says:

"Those who invoke not with God any other god, nor slay such life as God has made sacred except for just cause, nor commit fornication: and any that does this (not only) meets punishment, but the penalty on the Day of Judgement will be doubled to.him, and he will dwell therein in ignominy. Unless he repents, believes and works righteous deeds, for God will change the evil of such persons into good, and God is Oft-Forgiving Most-Merciful." (25:68-70)

The injunctions and forbiddings in Islam apply equally to men and women. The legal punishment for adultery is equal for men and women. Social hypocrisy in many societies over history had led to a double standard when considering sin committed by men versus sin committed by women. Society tended to be more lenient and permissive towards men forgiving men for sins not forgivable when women do them. At the root of the contemporary wave of free sex for both sexes was appa-rently to establish equality and remove discrimination between man and woman. Instead of calling for equal cleanliness the call was for equal dirt. Not so in Islam. and in a list of commendable deeds the Quran says:

Because the sex desire is usually attained before a man is financially capable of marriage, the love to God and mindfulness of Him should be sufficient motive for chastity:

"Let those who find not the wherewithal for marriage keep themselves chaste, until God gives them means out of His grace." (24:33) The prophet's prescription to the youth was:

Those of you who own the means should marry for this should keep their eyes uncraving and their chastity secure. Those who don't, may practise fasting for it curbs desire. " (Ibn Massoud)

Chastity is an attitude and a way of life. In Islam it is both a personal and a social value. A Muslim society should not condone relations entailing or conducive to sexual license. Social patterns and practices bent on flaring up the sexual desire are frowned upon by Islam be the means permissive ideologies, pruritic art or neglect of moral upbringing. Personal freedoms should never be taught as the freedom to challenge God's injunctions or trespass over the limits He drew.

Hinduism's view on premarital sex is rooted in its concept of the stages of life. The first of these stages, known as Brahmacharya, roughly translates as chastity. Celibacy is considered the appropriate behavior for both male and female students during this stage, which precedes the stage of the married householder. Many Sadhus (Hindu monks) are also celibate as part of their ascetic discipline.

In Sikhism, premarital or extra-marital sex is strictly forbidden. However, it is encouraged to marry and live as a family unit to provide and nurture children for the perpetual benefit of creation (as opposed to sannyasa or living as a monk, which was, and remains, a common spiritual practice in India). A Sikh is encouraged not to live as a recluse, beggar, monk, nun, celibate, or in any similar vein.

Celibacy is a must for all Jain monks and nuns. Chastity (Bhramacharya) is one of the five major vows of Jainism. The general Jain code of ethics requires that one do no harm to any living being in thought, action, or word. Adultery is clearly a violation of a moral agreement with one's spouse, and therefore forbidden, and fornication too is seen as a violation of the state of chastity.

The teachings of Buddhism include the Noble Eightfold Path, comprising a division called right action. Under the Five Precepts ethical code, Upāsaka and Upāsikā lay followers should abstain from sexual misconduct, while Bhikkhu and Bhikkhuni monastics should practice strict chastity.

The Five Precepts of the Daoist religion include No Sexual Misconduct, which is interpreted as prohibiting extramarital sex for lay practitioners and marriage or sexual intercourse for monks and nuns.