Not to be confused with cheese board.
Chessboard diagram with algebraic notation, generally used for printing or computer displays. On physical boards with notation, a set of letters/numbers typically face each player.

A chessboard is the type of checkerboard used in the classic board game chess, and consists of 64 squares (eight rows and eight columns) and 32 pieces.The squares are arranged in two alternating colors (light and dark). Wooden boards may use naturally light and dark brown woods, while plastic and vinyl boards often use brown or green for the dark squares and shades such as buff or cream for the light squares. Materials vary widely; while wooden boards are generally used in high-level games; vinyl, plastic, and cardboard are common for low-level and informal play. Decorative glass and marble boards are available but rarely accepted for games rated by national or international chess federations. Each square on the board has a name from a1 to h8. 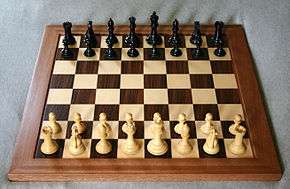 [1] According to FIDE equipment standards, the side of a square should be twice the diameter of a pawn's base.[2]

In modern commentary, the columns (called files) are labeled by the letters a to h from left to right from the white player's point of view, and the rows (called ranks) by the numbers 1 to 8, with 1 being closest to the white player, thus providing a standard notation called algebraic chess notation.

In older English commentary, the files are labeled by the piece originally occupying its first rank (e.g. queen, king's rook, queen's bishop), and ranks by the numbers 1 to 8 from each player's point of view, depending on the move being described. This is called descriptive chess notation and is no longer commonly used.

A chessboard is often painted or engraved on a chess table. thumbnail

A decorative chessboard made of glass

A Swedish competition standard chessboard made of masonite

A portable green and buff vinyl rollup board

A portable green and white mousepad style rollup board

Social play on a vinyl board in a park in Kiev