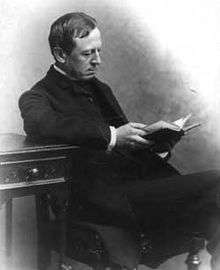 William Reed Huntington's essay was the basis of the Quadrilateral

The Quadrilateral had its genesis in an 1870 essay by an American Episcopal priest, William Reed Huntington. Huntington's purpose in proposing these four elements was to establish "a basis on which approach may be by God's blessing, made toward Home Reunion," that is, with the Roman Catholic and Orthodox Churches.

The four points found their way into a resolution of the House of Bishops of the American Episcopal Church, meeting in Chicago in 1886. As passed there, the resolution reads as follows:

We, Bishops of the Protestant Episcopal Church in the United States of America, in Council assembled as Bishops in the Church of God, do hereby solemnly declare to all whom it may concern, and especially to our fellow-Christians of the different Communions in this land, who, in their several spheres, have contended for the religion of Christ:

But furthermore, we do hereby affirm that the Christian unity can be restored only by the return of all Christian communions to the principles of unity exemplified by the undivided Catholic Church during the first ages of its existence; which principles we believe to be the substantial deposit of Christian Faith and Order committed by Christ and his Apostles to the Church unto the end of the world, and therefore incapable of compromise or surrender by those who have been ordained to be its stewards and trustees for the common and equal benefit of all men.

As inherent parts of this sacred deposit, and therefore as essential to the restoration of unity among the divided branches of Christendom, we account the following, to wit:

Furthermore, Deeply grieved by the sad divisions which affect the Christian Church in our own land, we hereby declare our desire and readiness, so soon as there shall be any authorized response to this Declaration, to enter into brotherly conference with all or any Christian Bodies seeking the restoration of the organic unity of the Church, with a view to the earnest study of the conditions under which so priceless a blessing might happily be brought to pass.

In 1888, the third Lambeth Conference (an international consultation of bishops of the Anglican Communion) passed Resolution 11. This was a scaled-back version of the resolution passed at Chicago two years earlier, more closely aligned with Huntington's original wording, and reads as follows:

That, in the opinion of this Conference, the following Articles supply a basis on which approach may be by God's blessing made towards Home Reunion:

(a) The Holy Scriptures of the Old and New Testaments, as "containing all things necessary to salvation," and as being the rule and ultimate standard of faith.
(b) The Apostles' Creed, as the Baptismal Symbol; and the Nicene Creed, as the sufficient statement of the Christian faith.
(c) The two Sacraments ordained by Christ Himself — Baptism and the Supper of the Lord — ministered with unfailing use of Christ's Words of Institution, and of the elements ordained by Him.
(d) The Historic Episcopate, locally adapted in the methods of its administration to the varying needs of the nations and peoples called of God into the Unity of His Church.

The 1920 Appeal to all Christian People

The 1920 Lambeth Conference picked up and reiterated the points of the earlier documents in fresh language. The rewording of the fourth was radical:

A ministry acknowledged by every part of the Church as possessing not only the inward call of the Spirit, but also the commission of Christ and the authority of the whole body.

The Episcopate was only expressly mentioned in the commentary which followed:

May we not reasonably claim that the Episcopate is the one means of providing such a ministry? It is not that we call in question for a moment the spiritual reality of the ministries of those Communions which do not possess the Episcopate. On the contrary, we thankfully acknowledge that these ministries have been manifestly blessed and owned by the Holy Spirit as effective means of grace ...[1]

According to Michael Ramsey this conciliatory presentation aroused a great readiness to discuss reunion, but later declarations were more qualified and therefore frustrating for Free Churchmen.[2]

Significance of the Quadrilateral 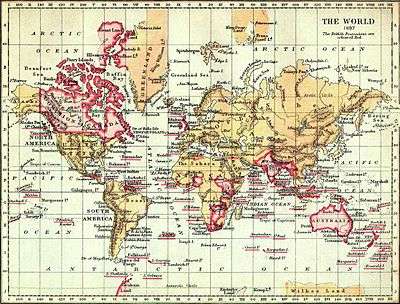 The Anglican Communion was growing throughout the British Empire, marked in pink, in the late 19th century

The Quadrilateral has had a significant impact on Anglican identity since its passage by the Lambeth Conference. The Resolution came at a time of rapid expansion of the Anglican Communion, primarily in the territories of the British Empire. As such, it provided a basis for a shared ethos, one that became increasingly important as colonial churches influenced by British culture and values, evolved into national ones influenced by local norms. At the same time, it has been the locus of fervent debate, especially over its third and fourth points.

The first point, concerning what Anglicans call "the suffiency of Scripture," takes its language directly from Article VI of the Thirty-Nine Articles of Faith, foundational to Anglican Scriptural exegesis and hermeneutics since the sixteenth century. As such, it has been widely accepted as written. Similarly, the second point describes the sine qua non of Catholic faith since antiquity, and so likewise has enjoyed broad acquiescence. To the extent that it has been controversial, the controversy has centered entirely on those parts of the Communion that have sought to expand a sufficient statement of faith to include other formulae. The third point has been controversial among some Anglicans as being inappropriately limited. In particular, many Anglo-Catholics have maintained that the five other sacraments should be included as essential marks of the Church (see Anglican sacraments). By far, the most controversial point has been the fourth, which many believe could open the door to challenging the Church's episcopal tradition of apostolic succession.

The Quadrilateral in ecumenical dialogue

The Chicago-Lambeth Quadrilateral has also been important to ecumenical dialogue. In this context, it had been helpful in the consultation between the Anglican and Roman Catholic Communions (see Anglican-Roman Catholic International Commission) and between certain Anglican ecclesiastical provinces and national Lutheran organizations.

Apostolicae curae is the title of a papal bull issued in 1896 by Pope Leo XIII declaring all Anglican ordinations to be "absolutely null and utterly void". It has been described as an early Catholic response to the ecumenical efforts of the Chicago-Lambeth Quadrilateral.