For the Chinese ethnicity, regardless of nationality or political affiliation, see Han Chinese.

Chinese people are the various individuals or groups of people associated with China (or Greater China),[1] either by reason of ancestry, heredity, ethnicity, nationality, citizenship, place of residence, or other affiliation. 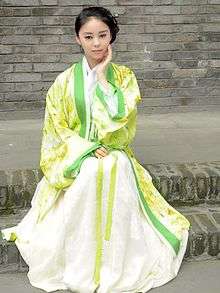 A number of ethnic groups within China, as well as people elsewhere with ancestry in the region, may be referred to as Chinese people.[2]

Han, the largest ethnic group in China, are often referred to as "Chinese" or "ethnic Chinese" in English.[3][4] The Han also form a majority or large minority in other countries, and may comprise as much as 19% of the global human population.[5]

During the Qing dynasty the term "Chinese people" (Chinese: 中國之人 Zhōngguó zhī rén; Manchu: Dulimbai gurun i niyalma) was used by the Qing government to refer to all subjects of the empire, including Han, Manchu, and Mongols.[7]

Zhonghua minzu (simplified Chinese: 中华民族; traditional Chinese: 中華民族; pinyin: Zhōnghuá Mínzú), the "Chinese nation", is a supra-ethnic concept which includes all 56 ethnic groups living in China that are officially recognized by the government of the People's Republic of China. It includes established ethnic groups who have lived within the borders of China since at least the Qing Dynasty (1644–1911).[8] The term zhonghua minzu was used by the Republic of China from 1911–1949 to refer to a subset of five ethnic groups in China.[9]

The Resident Identity Card is the official form of identification for residents of the People's Republic of China.

Overseas Chinese refers to people of Chinese ethnicity or national heritage who live outside of the People's Republic of China or Taiwan as the result of the continuing diaspora.[13] People with one or more Chinese ancestors may consider themselves overseas Chinese.[14] Such people vary widely in terms of cultural assimilation. In some areas throughout the world ethnic enclaves known as Chinatowns are home to populations of Chinese ancestry.