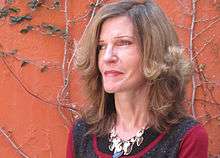 Christina McKenna [1] is a best-selling Irish author, who is most widely known as a novelist, due to the popularity of the three books that comprise the Tailorstown series. She grew up in Draperstown, Northern Ireland. She attended the Belfast College of Art where she obtained an honours degree in Fine Art and studied postgraduate English at the University of Ulster. In 1986, she left Northern Ireland and spent a decade teaching abroad. Since then she has lived, worked and painted pictures in Spain, Turkey, Italy, Ecuador and Mexico.

McKenna is the seventh of nine children brought up on a farm in County Londonderry. Her love affair with the written word began in "a school-room of fear and foreboding" in the early 1970s when her English teacher placed Seamus Heaney's collection of poems "Door into the Dark" in her hands. She asserts that his poetry "opened a door in the fearful me and I took refuge in the wonder of his prose. When I met him on those pages at that tender age I simply knew that one day in the far future I would be a writer."

The chance to honour that pledge would not come until 2003 when she started work on her memoir, MY MOTHER WORE A YELLOW DRESS. To date she has written six books, three non-fiction titles and three novels.

The novel was rejected by every notable publisher in Ireland and the UK. "After forty rejections I stopped counting," says McKenna. As a last resort she decided to try her luck Stateside. "It was the same old story. Again I lost count of the number of houses who said 'no'. But my tireless agent at the time, Bill Contardi, would not give up and continued sending it out. We were down to the last two when, finally, a small house in Connecticut, the Toby Press, said 'yes'." In 2009 the hardback version was published.

The Toby Press ceased trading in 2010 and the novel might have sunk without trace had Amazon Encore not stepped in. They published the paperback version of the novel in May 2011.

Since 2011 THE MISREMEMBERED MAN has sold over half a million copies, garnered more than 3,000 reviews on Amazon, held the Number 1 slot in Literary Fiction on Amazon.com during the Spring of 2013, has been translated into German, Spanish and Norwegian, with Russian, Lithuanian and Korean translations in the pipeline. Contrary to press reports, the film rights to this book have not been sold and are still up for grabs.

Her second novel, THE DISENCHANTED WIDOW is again set in Tailorstown, the same fictional village as THE MISREMEMBERED MAN. It was published on 27 August 2013. To date it has sold over 150,000 copies.

The third novel in the series, THE GODFORSAKEN DAUGHTER, was published on 17 March 2015, by Lake Union Publishing. Already a bestseller in the USA, UK and Australia, it seems destined to match the success of its predecessors.