"Citation metric" redirects here. It is not to be confused with Citation index.

One of the most basic citation metrics is how often an article was cited in other articles, books, or other sources (such as theses). Citation rates are heavily dependent on the discipline and the number of people working in that area. For instance, many more scientists work in neuroscience than in mathematics, and neuroscientists publish more papers than mathematicians, hence neuroscience papers are much more often cited than papers in mathematics.[6][7] Similarly, review papers are more often cited than regular research papers because they summarize results from many papers. This may also be the reason why papers with shorter titles get more citations, given that they are usually covering a broader area.[8] 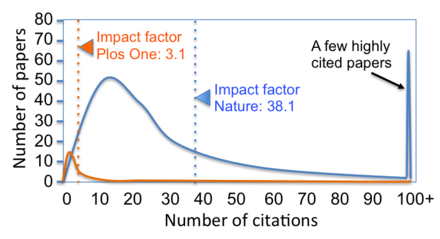 Journal impact factors are influenced heavily by a small number of highly cited papers. In general, most papers published in 2013–14 received many fewer citations than indicated by the impact factor. Two journals (Nature [blue], Plos One [orange]) are shown to represent a highly cited and less cited journal, respectively. Note that the high citation impact of Nature is derived from relatively few highly cited papers. Modified after Callaway 2016.[11]

Journal impact factors (JIFs) are a measure of the average number of citations that articles published by a journal in the previous two years have received in the current year. However, journals with very high impact factors are often based on a small number of very highly cited papers. For instance, most papers in Nature (impact factor 38.1, 2016) were "only" cited 10 or 20 times during the reference year (see figure). Journals with a "low" impact (e.g. Plos One, impact factor 3.1) publish many papers that are cited 0 to 5 times but few highly cited articles.[11]

JIFs are often mis-interpreted as a measure for journal quality or even article quality. The JIF is a journal-level metric, not an article-level metric, hence its use to determine the impact of a single article is statistically invalid. Citation distribution is skewed for journals because a very small number of articles is driving the vast majority of citations (see figure). Therefore, some journals have stopped publicizing their impact factor, e.g. the journals of the American Society for Microbiology.[12]

It is commonly believed that manuscripts are more often rejected at high impact journals. However, in a random selection of 570 journals there was no such correlation.[13] However, specific disciplines may have weak correlations, e.g. in the physical sciences there is even a negative correlation.[14]

Total citations, or average citation count per article, can be reported for an individual author or researcher. Many other measures have been proposed, beyond simple citation counts, to better quantify an individual scholar's citation impact.[15] The best-known measures include the h-index[16] and the g-index.[17] Each measure has advantages and disadvantages, spanning from bias to discipline-dependence and limitations of the citation data source.[18]

An alternative approach to measure a scholar's impact relies on usage data, such as number of downloads from publishers and analyzing citation performance, often at article level.[19][20][21][22]

As early as 2004, the BMJ published the number of views for its articles, which was found to be somewhat correlated to citations.[23] In 2008 the Journal of Medical Internet Research began publishing views and Tweets. These "tweetations" proved to be a good indicator of highly cited articles, leading the author to propose a "Twimpact factor", which is the number of Tweets it receives in the first seven days of publication, as well as a Twindex, which is the rank percentile of an article's Twimpact factor.[24]

An important recent development in research on citation impact is the discovery of universality, or citation impact patterns that hold across different disciplines in the sciences, social sciences, and humanities. For example, it has been shown that the number of citations received by a publication, once properly rescaled by its average across articles published in the same discipline and in the same year, follows a universal log-normal distribution that is the same in every discipline.[25] This finding has suggested a universal citation impact measure that extends the h-index by properly rescaling citation counts and resorting publications, however the computation of such a universal measure requires the collection of extensive citation data and statistics for every discipline and year. Social crowdsourcing tools such as Scholarometer have been proposed to address this need.[26]

While citation counts are often correlated with other measures of scholarly and scientific performance, causal statements linking a citation advantage with open access status[27][28][29][30][31][32][33][34] have been contradicted by some experimental and observational studies.[35][36]

Research suggests the impact of an article can be, partly, explained by superficial factors and not only by the scientific merits of an article.[37] Field-dependent factors are usually listed as an issue to be tackled not only when comparison across disciplines are made, but also when different fields of research of one discipline are being compared.[38] For instance in Medicine among other factors the number of authors, the number of references, the article length, and the presence of a colon in the title influence the impact. Whilst in Sociology the number of references, the article length, and title length are among the factors.[39] Also it is suggested scholars engage in ethical questionable behavior in order to inflate the number of citations articles receive.[40]

Automated citation indexing[41] has changed the nature of citation analysis research, allowing millions of citations to be analyzed for large scale patterns and knowledge discovery. The first example of automated citation indexing was CiteSeer, later to be followed by Google Scholar. More recently, advanced models for a dynamic analysis of citation aging have been proposed.[42][43] The latter model is even used as a predictive tool for determining the citations that might be obtained at any time of the lifetime of a corpus of publications.

According to Mario Biagioli: "All metrics of scientific evaluation are bound to be abused. Goodhart's law [...] states that when a feature of the economy is picked as an indicator of the economy, then it inexorably ceases to function as that indicator because people start to game it."[44]