Logo of the Citizens' Assembly, which includes its name in Irish and English.

The Citizens' Assembly (Irish: An Tionól Saoránach[1]) is a citizens' assembly established in Ireland in 2016 to consider several political questions: abortion, fixed term parliaments, referendums, population ageing, and climate change.[2][3] It will produce reports to be considered by the Oireachtas (parliament).[3]

The Citizens' Assembly is a successor to the 2012–14 Constitutional Convention which was established by the Oireachtas in accordance with the government programme agreed by the Fine Gael–Labour coalition formed after the 2011 general election. Convention members were a chairperson nominated by the government, 33 representatives chosen by political parties, and 66 randomly chosen citizens. Meeting over 15 months, it considered seven constitutional issues previously specified by the Oireachtas and two more of its own choosing.[4] It made 18 recommendations for constitutional amendments and 20 for other changes to laws or Oireachtas standing orders; the government accepted some, rejected others, and referred others to committees for further consultation.[5] In 2015 Taoiseach Enda Kenny entertained the possibility of a similar body meeting after the next general election, which occurred in 2016.[6] In the buildup to the election, various politicians proposed changes to Irish abortion law, including repeal of the Eighth Amendment of the Constitution, which guarantees a fetal right to life. In November 2015, Kenny promised "a Citizen's Convention on the constitution, or whatever title would be appropriate" to address the issue.[7][8]

The programme agreed by the Fine Gael–independent minority government formed after the 2016 election included this commitment:[9]

We will establish a Citizens’ Assembly, within six months, and without participation by politicians, and with a mandate to look at a limited number of key issues over an extended time period. These issues will not be limited to those directly pertaining to the constitution and may include issues such as, for example how we, as a nation, best respond to the challenges and opportunities of an ageing population. That said, we will ask the Citizens’ Assembly to make recommendations to the Dáil on further constitutional changes, including on the Eighth Amendment, on fixed term parliaments and on the manner in which referenda are held (e.g. should ‘super referendum days’, whereby a significant number of referenda take place on the same day, be held).

On 13 July 2016, Damien English moved a resolution in the 32nd Dáil (lower house) approving the "calling of a Citizens’ Assembly" to consider the four issues specified in the government programme and "such other matters as may be referred to it".[10] A Green Party amendment was accepted which added "how the State can make Ireland a leader in tackling climate change" to the list of topics.[10] Sinn Féin and AAA–PBP amendments were rejected.[10] An analogous resolution was passed in the 25th Seanad (upper house) on 15 July.[2]

On 26 July 2016, Mary Laffoy, a judge of the Supreme Court of Ireland, was chosen by the government as chairperson of the assembly.[11]

The 99 other members are "citizens entitled to vote at a referendum, randomly selected so as to be broadly representative of Irish society".[2] As with the 66 citizen members of the Constitutional Convention, these 99 plus 99 substitutes[12] were selected by an opinion polling company;[13][14][15] Red C won the tender and began selection at the start of September.[16] The Electoral (Amendment) Act 2016 was passed to enable the electoral register to be used in this process.[14][3][17] Media were asked not to photograph the citizen members before the inaugural Assembly meeting.[18] By the 27 November 2016 meeting, 11 of the 99 had been replaced by substitutes.[19] 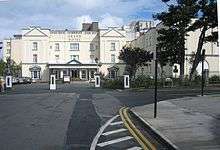 Grand Hotel, Malahide, where the assembly will meet from November 2016.

The inaugural and introductory assembly meeting was held on 15 October 2016 at Dublin Castle.[18][23][24][25] The Grand Hotel, Malahide won the tender to host later, working, meetings.[25] RTÉ News predicted that there would be ten weekend sessions, each "opened with an address from the Chairperson, followed by expert presentations, Q&A sessions and debate, roundtable discussion and a plenary session."[16] Meetings are livestreamed.[25][26] Submissions will be invited from the public.[2][13] The assembly will complete its business within a year of its first meeting.[2] The government will formally respond to each report.[2] The calendar published in October 2016 includes seven three-day working meetings, one in November 2016 and one each month from January to July 2017.[27]

See also: Eighth Amendment of the Constitution of Ireland and Abortion in the Republic of Ireland

The first issue to be considered will be the Eighth Amendment,[2] beginning at its first working meeting on 25 November 2016.[28][27] Enda Kenny in September 2016 estimated it could take "six to seven months" to issue a report,[24] which will be referred to an Oireachtas joint committee, which Kenny said would probably be one specially set up for the purpose.[29] This committee will in turn produce a report for debate in each house.[2]

The Assembly's inaugural meeting decided that the abortion issue would be the topic for its first four working meetings.[18] An advisory group of five experts was appointed: a medical lawyer, two constitutional lawyers, and two obstetricians.[18] The chairperson said she would investigate claims that an assembly member had publicly expressed pro-choice views on Twitter.[18][30] In the Dáil, Mattie McGrath complained that two of the five experts had previously expressed dissatisfaction with the existing abortion provisions.[31]

The opposition Anti-Austerity Alliance–People Before Profit (AAA–PBP) scheduled the second stage of a private member's bill repealing the Eighth Amendment for debate in the Dáil on 25 October 2016.[32][33] Fine Gael opposed the bill on the grounds that it would pre-empt the Citizens' Assembly discussion.[32] Similarly, independent minister Katherine Zappone said that, in deference to the Assembly's work, she would oppose the bill despite herself favouring repeal.[34] The Independent Alliance ministers wanted a free vote, which Fine Gael opposed as compromising cabinet collective responsibility.[32] As a compromise, it was agreed that government TDs would oppose the AAA–PBP bill and would not shorten the Assembly's timeframe for considering the abortion issue, but that the Oireachtas would expedite the processing of the Assembly's report, by establishing the select committee ahead of time and giving it a strict six-month lifespan.[32] Accordingly, Simon Harris, the Minister for Health, moved an amendment to the second-reading motion, that "Dáil Éireann declines to give the Bill a second reading in order that the Citizens’ Assembly, established by Resolutions of Dáil Éireann and Seanad Éireann, can conclude its deliberations on the Eighth Amendment which is the subject matter of this Bill, and report to the Oireachtas in the first half of 2017".[35]

In November 2016, David Van Reybrouck commended the Citizens' Assembly and the predecessor Constitutional Convention as models that other European countries could usefully imitate.[36]