For other uses, see Cleavage. 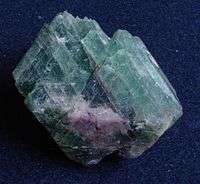 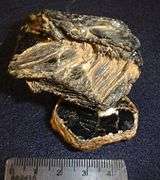 Cleavage, in mineralogy, is the tendency of crystalline materials to split along definite crystallographic structural planes. These planes of relative weakness are a result of the regular locations of atoms and ions in the crystal, which create smooth repeating surfaces that are visible both in the microscope and to the naked eye.[1]

Crystal parting occurs when minerals break along planes of structural weakness due to external stress or along twin composition planes. Parting breaks are very similar in appearance to cleavage, but only occur due to stress. Examples include magnetite which shows octahedral parting, the rhombohedral parting of corundum and basal parting in pyroxenes.[1]

Cleavage is a physical property traditionally used in mineral identification, both in hand specimen and microscopic examination of rock and mineral studies. As an example, the angles between the prismatic cleavage planes for the pyroxenes (88–92°) and the amphiboles (56–124°) are diagnostic.[1]

Crystal cleavage is of technical importance in the electronics industry and in the cutting of gemstones.

Precious stones are generally cleaved by impact, as in diamond cutting.

Synthetic single crystals of semiconductor materials are generally sold as thin wafers which are much easier to cleave. Simply pressing a silicon wafer against a soft surface and scratching its edge with a diamond scribe is usually enough to cause cleavage; however, when dicing a wafer to form chips, a procedure of scoring and breaking is often followed for greater control. Elemental semiconductors (Si, Ge, and diamond) are diamond cubic, a space group for which octahedral cleavage is observed. This means that some orientations of wafer allow near-perfect rectangles to be cleaved. Most other commercial semiconductors (GaAs, InSb, etc.) can be made in the related zinc blende structure, with similar cleavage planes.