For other uses, see Colette (disambiguation).

Colette (French: [kɔ.lɛt]; Sidonie-Gabrielle Colette, 28 January 1873 – 3 August 1954) was a French novelist nominated for the Nobel Prize in Literature in 1948.[1] Her best known work, the novella Gigi (1944), was the basis for the film and Lerner and Loewe stage production of the same name. She was also a mime, an actress and a journalist.

Sidonie-Gabrielle Colette was born on January 28, 1873, to war hero and tax collector Jules-Joseph Colette and his wife Adèle Eugénie Sidonie ("Sido"), nėe Landoy, in the village of Saint-Sauveur-en-Puisaye in the département of Yonne, Burgundy. The family was initially well off, but by the time she was of school age poor financial management had substantially reduced her father's income and she attended a public school from the ages of 6 to 17—this was, nevertheless, a fairly extensive education for a girl of the period.[2][3]

In 1893 she married Henry Gauthier-Villars (1859–1931) or 'Willy', his nom-de-plume,[4] a well-known author and publisher, and her first four novels—the four Claudine stories, Claudine à l'école (1900), Claudine à Paris (1901), Claudine en menage (1902), and Claudine s'en va (1903)—appeared under his name. They chart the coming of age of their heroine, Claudine, from an unconventional fifteen-year-old in a Burgundian village to the literary salons of turn-of-the-century Paris. (The four are published in English as Claudine at School, Claudine in Paris, Claudine Married, and Claudine and Annie). The story they tell is semi-autobiographical, but not entirely—most strikingly, Claudine, unlike Colette, is motherless.[5][6]

Willy, fourteen years older than his wife and one of the most notorious libertines in Paris, introduced Colette into avant-garde intellectual and artistic circles while engaging in sexual affairs and encouraging her own lesbian dalliances. It was he who chose the titillating subject-matter of the Claudine novels, "the secondary myth of Sappho...the girls' school or convent ruled by a seductive female teacher" (Ladimer, p. 53). Colette later said that she would never have become a writer if not for Willy.[7][8]

Colette and Willy separated in 1906, although it was not until 1910 that the divorce became final. She had no access to the sizable earnings of the Claudine books—the copyright belonged to Willy—and until 1912 she followed a stage career in music halls across France, sometimes playing Claudine in sketches from her own novels, earning barely enough to survive and often hungry and unwell. This period of her life is recalled in La Vagabonde (1910), which deals with women's independence in a male society, a theme to which she would regularly return in future works. During these years she embarked on a series of relationships with other women, notably with Mathilde de Morny, Marquise de Belbeuf ("Missy"), with whom she sometimes shared the stage. On January 3, 1907, an onstage kiss between Missy and Colette in a pantomime entitled Rêve d'Égypte caused a near-riot, and as a result they were no longer able to live together openly, although their relationship continued for another five years.[9][10][11]

In 1912 she married Henry de Jouvenel, the editor of Le Matin. A daughter, Colette de Jouvenel, nicknamed Bel-Gazou, was born in 1913. During the war she devoted herself to journalism, but marriage allowed her to devote her time to writing.[9][12][13] 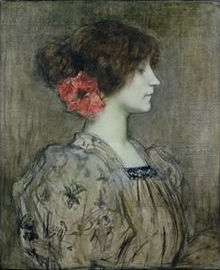 In 1920 Colette published Chéri, portraying love between an older woman and a much younger man. Chéri is the lover of Léa, a wealthy courtesan; Léa is devastated when Chéri marries a girl his own age, and delighted when he returns to her, but after one final night together she sends him away again.[14]

The marriage to Jouvenel ended in divorce in 1924, partly due to Jouvenel's infidelities and partly to Colette's own affair with her sixteen-year-old stepson, Bertrand de Jouvenel. In 1925 she met Maurice Goudeket, who became her final husband (the couple stayed together until her death).[9][12]

Already an established writer (The Vagabond had received three votes for the prestigious Prix Goncourt), the decades of the 1920s and 1930s were Colette's most productive and innovative period.[15] Set mostly in Burgundy or Paris during the Belle Époque, her work treated married life, sexuality, and the problems of a woman's struggle for independence. It was frequently quasi-autobiographical: Chéri (1920) and Le Blé en herbe (1923) both deal with love between an aging woman and a very young man, a situation reflecting her relationship with Bertrand de Jouvenel and even Goudeket, who was sixteen years her junior.[12][9] La Naissance du Jour (1928) is her explicit criticism of the conventional lives of women, expressed in a meditation on age and the renunciation of love through the character of her mother, Sido.[16]

By this period Colette was frequently acclaimed as France's greatest woman writer. "It ... has no plot, and yet tells of three lives all that should be known", wrote Janet Flanner of Sido. "Once again, and at greater length than usual, she has been hailed for her genius, humanities and perfect prose by those literary journals which years ago ... lifted nothing at all in her direction except the finger of scorn."[17] 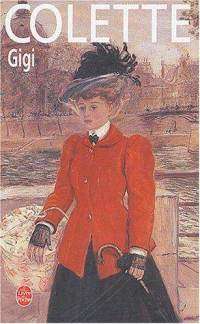 Colette was 67 years old at the fall of France, and remained in Paris, in her apartment in the Palais Royal. Her husband Maurice Goudeket, a Jew, was arrested by the Gestapo in December 1941, and although he was released after a few months through the intervention of the French wife of the German ambassador, Colette lived through the rest of the war years with the anxiety of a possible second arrest.[18][19] During the Occupation she produced two volumes of memoirs, Journal à rebours (1941) and De ma fenêtre (1942 — the two issued in English in 1975 as Looking Backwards).[9]

In 1944 she published what became perhaps her most famous work, Gigi, telling the story of sixteen year old Gilberte ("Gigi") Alvar. Born into a family of demimondaines, Gigi is being trained as a courtesan to captivate a wealthy lover, but breaks with tradition by marrying him instead.[20] In 1949 it was made into a French film starring Danièle Delorme and Gaby Morlay, then in 1951 adapted for the stage with the then-unknown Audrey Hepburn in the title role, picked by Colette personally; the 1958 Hollywood musical, starring Leslie Caron and Louis Jourdan, with a screenplay by Alan Jay Lerner and a score by Lerner and Frederick Loewe, won the Academy Award for Best Picture.

In the postwar years, she became a famous public figure, crippled by arthritis and cared for by Goudeket who supervised the preparation of her collected works, or Oeuvres completes (1948–1950). She continued to write during these years, bringing out L'Etoile vesper (1944) and Le fanal bleu (1949), in which she reflected on the problems of a writer whose inspiration is primarily autobiographical. On her death on August 3, 1954, she was refused a religious funeral by the Catholic Church on account of her divorces, but was given a state funeral, the first French woman of letters to be granted this honour, and interred in Père-Lachaise cemetery.[18][19][9] 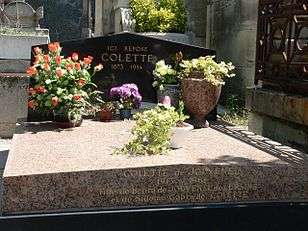 Initially considered a limited if talented novelist (despite the outspoken admiration in her lifetime of figures such as André Gide and Henri de Montherlant), she has been increasingly recognised as an important voice in women's writing.[9]

Singer-songwriter Rosanne Cash paid tribute to the writer in the song, "The Summer I Read Colette", on her 1996 album 10 Song Demo.

Truman Capote wrote a short story about her (1970) called "The White Rose".

The Colette Study Centre in France has numerous items related to Colette's life. Jane Gilmour, Ph.D, wrote Colette’s France: Her Lives, Her Loves (Hardie Grant Books), which is a book "about Colette’s life through the places where she lived".

In 2014, SUNY Press published Shipwrecked on a Traffic Island and Other Previously Untranslated Gems (translated by Zack Rogow and Renée Morel), a collection of sketches, mini-essays, radio talks, reminiscences, and journalistic pieces written by Colette. This was the first new work by Colette to appear in English in half a century.

"Lucette Stranded on the Island" by Julia Holter, from her 2015 album Have You in My Wilderness, is based on a minor character from Colette's short story Chance Acquaintances.[21]