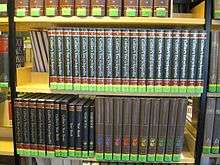 The encyclopedia in a German library, 2011

The 1997 edition has 23,000 entries with few short entries, as related subjects are usually consolidated into longer articles. A high percentage of the illustrations are in color, and more full-color illustrations had been added in recent years resulting in pictorial matter accounting for about two-fifths of the pages. Bibliographies are found in the last volume which also contains the 450,000 entry essential index. An annual Collier's Year Book was also published.

A well-known comparison is that of Kenneth Kister, who gave a qualitative and quantitative comparison of Collier's Encyclopedia with the Encyclopædia Britannica and the Encyclopedia Americana.[1] For the quantitative analysis, ten articles were selected at random (circumcision, Charles Drew, Galileo, Philip Glass, heart disease, IQ, panda bear, sexual harassment, Shroud of Turin and Uzbekistan) and letter grades (A–D, F) were awarded in four categories: coverage, accuracy, clarity, and recency. In all four categories and for all three encyclopaedias, the four average grades fell between B− and B+, chiefly because not one encyclopaedia had an article on sexual harassment in 1994. In the accuracy category, Collier's received one D and seven As. Encyclopedia Americana received eight As, and the Britannica received one D and eight As; thus, Collier's received an average score of 92% for accuracy to Americana's 95% and Britannica's 92%. In the timeliness category, Collier's averaged an 85% to Americana's 90% and Britannica's 86%. After a more thorough qualitative comparison of all three encyclopedias, Kister recommended Collier's Encyclopedia primarily on the strength of its writing, presentation and navigation.