This article is about the literary device. For other uses, see Conceit (disambiguation).

In literature, a conceit is an extended metaphor with a complex logic that governs a poetic passage or entire poem. By juxtaposing, usurping and manipulating images and ideas in surprising ways, a conceit invites the reader into a more sophisticated understanding of an object of comparison. Extended conceits in English are part of the poetic idiom of Mannerism, during the late sixteenth and early seventeenth century. 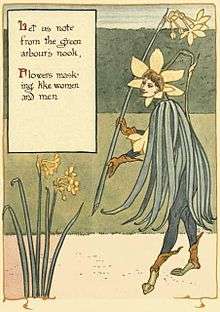 The flowers are beginning their masquerade as people. Sir Jonquil begins the fun. (Walter Crane, 1899)

In English literature the term is generally associated with the 17th century metaphysical poets, an extension of contemporary usage. The metaphysical conceit differs from an extended analogy in the sense that it does not have a clear-cut relationship between the things being compared.[1] Helen Gardner[2] observed that "a conceit is a comparison whose ingenuity is more striking than its justness" and that "a comparison becomes a conceit when we are made to concede likeness while being strongly conscious of unlikeness." An example of the latter occurs in John Donne's "A Valediction: Forbidding Mourning", in which a couple faced with absence from each other is likened to a compass.

Dull sublunary lovers' love
(Whose soul is sense) cannot admit
Absence, because it doth remove
Those things which elemented it.

But we by a love so much refined,
That our selves know not what it is,
Inter-assured of the mind,
Care less, eyes, lips, and hands to miss.

Our two souls therefore, which are one,
Though I must go, endure not yet
A breach, but an expansion,
Like gold to airy thinness beat.

If they be two, they are two so
As stiff twin compasses are two;
Thy soul, the fixed foot, makes no show
To move, but doth, if the other do.

And though it in the center sit,
Yet when the other far doth roam,
It leans and hearkens after it,
And grows erect, as that comes home.

Such wilt thou be to me, who must,
Like th' other foot, obliquely run;
Thy firmness makes my circle just,
And makes me end where I begun.

The metaphysical conceit is often imaginative, exploring specific parts of an experience.[3] John Donne's "The Flea" is a poem seemingly about fleas in a bed. When Sir Philip Sidney begins a sonnet with the conventional idiomatic expression "My true-love hath my heart and I have his".[4] He takes the metaphor literally and teases out a number of literal possibilities in the exchange of hearts. The result is a fully formed conceit.

The Petrarchan conceit is a form of love poetry wherein a man's love interest is referred to in hyperbole. For instance, the lover is a ship on a stormy sea, and his mistress is either "a cloud of dark disdain" or the sun.[5]

The paradoxical pain and pleasure of lovesickness is often described using oxymoron, for instance uniting peace and war, burning and freezing, and so forth. But images which were novel in the sonnets of Petrarch became clichés in the poetry of later imitators. Romeo uses hackneyed Petrarchan conceits when describing his love for Rosaline as "bright smoke, cold fire, sick health".

In the Renaissance, the term (which is related to the word concept) indicated any particularly fanciful expression of wit, and was later used pejoratively of outlandish poetic metaphors.

Recent literary critics have used the term to mean simply the style of extended and heightened metaphor common in the Renaissance and particularly in the 17th century, without any particular indication of value. Within this critical sense, the Princeton Encyclopedia makes a distinction between two kinds of conceits: the Metaphysical conceit, described above, and the Petrarchan conceit. In the latter, human experiences are described in terms of an outsized metaphor (a kind of metaphorical hyperbole), like the stock comparison of eyes to the sun, which Shakespeare makes light of in his Sonnet 130: "My mistress' eyes are nothing like the sun."