Canada declared war against Germany on September 10, 1939, and sent one division to Europe, which did not have an opportunity to engage in combat before France was defeated by Germany. Fearing the civil and political unrest that had occurred during World War I, as well as hoping to defeat the nationalist Premier Maurice Duplessis in Quebec who called a snap election in September 1939 to seek a mandate to oppose the war, Prime Minister William Lyon Mackenzie King pledged in September 1939 to not introduce overseas conscription for the duration of the war. During the 1939 Quebec election campaign, the Dominion government made an unprecedented intervention in a provincial election in order the defeat the Union Nationale government and ensure the victory of the pro-war Quebec Liberals under Adélard Godbout. By electing Godbout as Premier on 25 October 1939, there was an understanding in Quebec that the reward for voting out Duplessis would be no overseas conscription. Many Canadians supported Mackenzie King's pledge, even as it became obvious the war would not end quickly.

As in the First World War, young French-Canadians joined the few traditional French-speaking regiments of the Canadian army, such as the Regular-Army Royal 22e Régiment, and several Militia regiments that were mobilized. In the Infantry, barracks life and most training was in French and only the command and radio language was in English.

In the rest of the military, however, similar French-speaking units were not created. Among the justifications for this policy were the predominance of the radio, and the fact that the technical instruction was only available in English. The 12th Armoured Regiment (Three Rivers Regiment), originally mobilized by the francophone militia unit the Three Rivers Regiment (Tank), was reorganized and fought as an English-speaking unit. Many French-speaking soldiers were sidetracked in this process. One of the most famous was Jean-Victor Allard, who demanded a transfer from the Three Rivers Regiment to the Infantry; he went on to become a brigade commander in Northwest Europe and then in Korea, command a British Division in NATO and subsequently become Chief of the Defence Staff of the Canadian Armed Forces, where he took pleasure in creating the first French-speaking brigade.[2]

While units such as the Royal 22e Régiment, Les Fusiliers Mont-Royal, the Régiment de la Chaudière and the Régiment de Maisonneuve all had outstanding records during World War II, some feel that if they had been concentrated into the same brigade (as French-Canadians requested and as currently exists in the Canadian Armed Forces), it could have become a focus of pride for French-Canada, encouraging the war effort and political support in Quebec. These units were, however, distributed among the various English-speaking divisions of the Canadian Army overseas. Jack Granatstein in his book The Generals, suggests that a shortage of French-speaking staff trained officers meant that any attempt to create an entire Francophone brigade would have likely ended in failure. However, the brigade could well have used English-speaking staff at the Brigade HQ; it would have been no different from the situation whereby these French-speaking units had to deal with English higher HQs in their various dispersed divisions.

Acceptance of French-speaking units was greater in Canada from the start of the Second World War in comparison to the first. While the creation of the 22nd Infantry Battalion (French-Canadian) required large rallies of French-Canadians in 1914 accompanied by political pressure to overcome Minister Sam Hughes' abhorrence of the idea, this greater acceptance of French-Canadian units as well as informal use of their language diminished the ferocity of Quebec's resistance to the war effort.

In June 1940, the government adopted conscription for home service in The National Resources Mobilization Act, 1940 (NRMA), which allowed the government to register men and women and move them into jobs considered necessary for wartime production, but did not allow them to be conscripted for overseas service.

By the late summer of 1944, the numbers of new recruits were insufficient to replace war casualties in Europe, particularly among the infantry.[3] 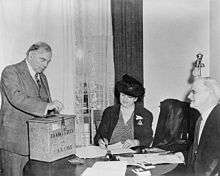 William Mackenzie King voting in the plebiscite on the introduction of conscription for overseas military service
See also: Referendums in Canada: Plebiscite on conscription

By 1941 there were enough volunteers for five overseas divisions. Meanwhile, the Conservatives were pressuring King to advise that the Governor General introduce overseas conscription. In April 1942 a plebiscite was held on the question, "Are you in favour of releasing the Government from any obligations arising out of any past commitments restricting the methods of raising men for military service?"

The plebiscite was supported by most English Canadians as well as the banned Communist Party of Canada which established Tim Buck "Yes" Committees to campaign for a yes vote. Across Canada, 64.5% of voters were in favour of conscription, with English Canadians voting 83% in favour. The proposal received hardly any support from French Canadians, especially in Quebec, where anti-conscription groups (including one led by Henri Bourassa, the most vocal opponent of conscription in 1917) convinced 72.9% of voters to oppose the plebiscite.[4] The government then passed Bill 80, repealing the sections of the NRMA that did not allow for overseas conscription. However, many Canadians still did not support immediate conscription; there were a few riots in Montreal, although these were not on the same scale as the 1917 and 1918 riots. Even in Toronto, a strongly pro-conscription region, Conservative Arthur Meighen was defeated in a by-election after promising to help introduce conscription.

Following the plebiscite, Public Works minister Pierre Joseph Arthur Cardin quit the King cabinet to protest his plan to introduce conscription. A number of other Quebec Liberal MPs also left the party in 1942 over the conscription issue, many of whom joined the Bloc populaire canadien when it was formed in the fall of 1942 to campaign against the government.

After the campaigns in Italy in 1943 and the Normandy invasion in 1944, combined with a lack of volunteers, Canada faced a shortage of troops. A brigade from one of the three "home defence" divisions in Canada was sent to the Aleutian Islands Campaign in 1943 (the islands were technically North American soil and thus deployment there was not considered "overseas"). These divisions were made up largely of conscripts, other than officers and NCOs, and desertions before embarkation were noted. However, no further combat employment was made until early 1945, when 12,908 men were sent overseas, most of whom were from the home service conscripts drafted under the NRMA, rather than from the general population.

Montreal Daily Star announce the surrender of Germany. May 7, 1945

The French-Canadian ministers in Cabinet, and Quebec in general, did not trust Defence Minister James Ralston, and King felt it was politically sensible to replace him as Minister of National Defence with the anti-conscription General Andrew McNaughton in November 1944.[5] McNaughton was unable to produce large numbers of volunteers for the army, although there were numerous volunteers for the navy and air force. Some members of King's cabinet threatened to resign and bring down the government. King finally agreed to a one-time levy of 17,000 NRMA conscripts for overseas service in November 1944. When word of the decision reached soldiers stationed in Terrace, British Columbia, it resulted in the short-lived Terrace Mutiny.

Few conscripts saw combat in Europe: only 2463 men reached units on the front lines. Out of these, 69 lost their lives. Politically, this was a successful gamble for King, as he avoided a drawn-out political crisis and remained in power until his retirement in 1948.

The NRMA men who refused to "go active" were derisively called "zombies" both in Canada and overseas; Farley Mowat recalls in his volumes of war memoirs savagely disliking those who wore the uniform but refused to make the same sacrifices he and his brothers in arms were called on to make in Italy and North-West Europe.[6] The "Zombies" were so-called because they were soldiers who could not fight overseas, making them like the reanimated corpses from Haitian mythology were neither alive nor dead, but rather somewhere in-between. The "Zombies" were widely hated by the men who had volunteered for overseas service as cowards.[7] The "Zombies" wore a black tie and collared shirts as part of their uniforms while volunteers for overseas duties did not.[7] In April 1945 when the men of the 1st Canadian Army were informed that henceforth they would now wear the Zombie black tie and collared shirt, Mowat serving with the Hastings and Prince Edward Regiment wrote: "the black tie itself was known as the Zombie tie, and the resentment of the volunteers, who were now ordered to wear this symbol of shame was most outspoken."[7]