Copper Canyon Press[1][2] is an independent, non-profit small press, specializing in the publication of poetry and located in Port Townsend, Washington. Since 1972, the Press has published poetry exclusively.

Copper Canyon Press publishes new collections of poetry by both revered and emerging[3] American poets, translations of classical and contemporary work from many of the world's cultures,[4] re-issues of out-of-print poetry classics, prose books about poetry, and anthologies. 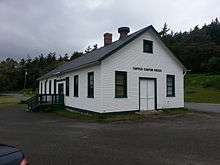 The press published What About This: Collected Poems of Frank Stanford[9] to great critical acclaim in 2015. In his New York Times review,[10] Dwight Garner complimented the press for performing a "vital and difficult task" and giving the reader "a chance to see him (Stanford) whole." National Public Radio called the book's release "the big event in poetry for 2015."[11]

Also in 2015, Copper Canyon Press acquired the U.S. rights to a manuscript of lost poems by Nobel Laureate Pablo Neruda. Discovered by archivists from The Pablo Neruda Foundation in the summer of 2014 just after the April 2013 exhumation of Neruda's body in Chile,[12] this collection of poems has been called “a literary event of universal importance" and “the biggest find in Spanish literature in recent years”.[13] The collection, Then Come Back: The Lost Neruda Poems, translated by Pulitzer finalist Forrest Gander, was released in April 2016 and includes full-color, facsimile presentations of Neruda’s handwritten poems.[14] Copper Canyon was also awarded the rights to publish Neruda’s first book, Crepusulario, which has also never appeared in the U.S. in English translation.