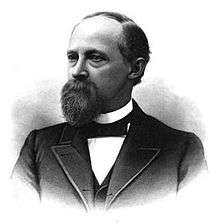 Cornelius Holgate Hanford (April 21, 1849 – March 2, 1926) was an American judge and the first United States Judge for the District of Washington, who resigned his office under threat of impeachment. He was the younger brother of the newspaper editor Thaddeus Hanford. The former agricultural community of Hanford, Washington was named for him.[1]

Hanford was born in Winchester, Van Buren County, Iowa. His parents, Edward and Abbie J. (Holgate) Hanford, were natives of Ohio, but were married in Iowa. Their ancestors were among the pioneer settlers of Connecticut. His father Edward Hanford was an extensive farmer of Iowa, but in 1853 sold his possessions and moved with family and friends, to Oregon Territory and then to Seattle, Washington where his brothers, George Hanford and Ebenezer Seymour Hanford, and his brother-in-law, John C. Holgate, were already located. He brought his family there in the summer of 1854.

The Indian troubles of 1855-56 destroyed the stock and improvements Edward, and the boys, of whom there were five, were thrown upon their own resources at an early age. Cornelius attended the village school when not otherwise engaged.

When Cornelius Hanford was twelve years of age the family moved to San Francisco, California and there Cornelius secured employment as office boy, and attended the night school. He also took a course in the Commercial College. In 1866 the family returned to Seattle and young Hanford was employed for two years in carrying the mail to Puyallup, Washington.

Completing his mail contract, Hanford followed fanning up to 1869, then went to Walla Walla, and spent three years teaching school, with intervals at farm labor. He then desired to enter the stock business, but on account of ill health, returned to his home in Seattle to recuperate and as his strength was slow in returning, he abandoned the project and in the spring of 1873 engaged in the study of law in the office of George M. McConaha, Prosecuting Attorney for the Third Judicial District. Hanford attended to the office work, and was admitted to the bar in February, 1875.

Hanford became a partner of the firm which continued until McConaha lost his health. Hanford then continued alone for a time, subsequently becoming connected with Colonel C.H. Larrabee, Judge Roger S. Green, John H. McGraw and J.F. McNaught, all prominent characters in the history of Seattle.

In March 1889, Judge Hanford was appointed Chief Justice of Washington Territory by President Benjamin Harrison, and held that office until the admission of the Territory to Statehood, when his office lapsed; but he was at once honored with the appointment by the President to the office of United States Judge for the District of Washington.

During the Chinese trouble of 1885-'86 he was a leader of the law-and-order class, and spent much of the winter in advising with Mayor Yesler and Sheriff McGraw, and in prosecuting those leaders who had committed or assisted in overt acts. The Judge was also a member of the Howe Guards, and took an active part in the civic and social organization of Company E, First Regiment, and continued as a member of the company until called to the bench.

In politics Judge Hanford was described as an ardent Republican; during the campaign of 1888 he was chairman of the Republican Territorial Committee.

As a State Judge, he regularly and incorrectly misinterpreted federal laws on Indian fishing rights in favor of the new State's non-Indian settlers. The Supreme Court eventually overturned his ruling versus Yakima stating that "the treaty was not a grant of rights to the Indians, but a grant of rights from them. - a reservation of those not granted.".[2]

After the fire of June, 1889, he was the first to publicly propose that the city should turn the disaster into a public benefit by widening and straightening some of the principal streets of the city.

Hanford was nominated by President Benjamin Harrison on February 10, 1890, to a new seat created by 26 Stat. 45. He was confirmed by the United States Senate on February 25, 1890, and received his commission the same day. On March 2, 1905, he was reassigned to the newly-created United States District Court for the Western District of Washington.

In 1912, Hanford became the subject of public controversy, and an impeachment investigation by the House of Representatives, after a ruling in which he revoked the citizenship of an immigrant as having been procured by fraud, allegedly due to the person's Socialist beliefs. A House committee investigating the impeachment resolution heard testimony accusing Hanford of habitual drunkenness, and of having accepted financial favors from the Northern Pacific Railroad after making a ruling that reduced the company's tax liability.[3] Hanford resigned his judgeship immediately after the testimony about the Northern Pacific transaction was completed, amid insinuations in the press that further witnesses were about to reveal even more corrupt behavior.[4] The House committee terminated its impeachment proceedings upon his resignation.

Cornelius H. Hanford married Clara M. Baldwin in November, 1875. They had had eight children. He died in Pierce County, Washington.

Much of the text above is from a profile in "An Illustrated History of the State of Washington", by Rev. H.K. Hines, D.D., The Lewis Publishing Co., Chicago, IL. 1893.