Corrosion of Conformity (also known as C.O.C.) is an American heavy metal band from Raleigh, North Carolina formed in 1982. For almost the majority of its existence, the band has consisted of guitarist Woody Weatherman, bassist Mike Dean (who left in 1987 but rejoined six years later), drummer Reed Mullin (who left in 2001 but rejoined nine years later) and vocalist and rhythm guitarist Pepper Keenan (who joined the band in 1989). After a hiatus in 2006, Corrosion of Conformity returned in 2010 without Keenan, who had been busy touring and recording with Down, but announced their reunion with him in December 2014.[5]

Corrosion of Conformity started as a hardcore punk band but later moved towards a slower and blues-tinged heavy metal sound. To date, the band has released seven studio albums, two EPs, one compilation, and one live album. Their first three studio albums―Eye for an Eye (1984), Animosity (1985) and Blind (1991)―attracted the attention of Columbia Records, who signed the band in 1993. Corrosion of Conformity found success with the release of their 1994 fourth studio album, Deliverance, which peaked at number 155 on the Billboard 200 and spawned the hits "Albatross" and "Clean My Wounds". Their 1996 follow-up Wiseblood was also successful, and became Corrosion of Conformity's highest-charting album in the United States, peaking at number 104 on the Billboard 200. Their latest album, IX, was released on July 1, 2014.

Corrosion of Conformity (C.O.C.) was formed in Raleigh, North Carolina by bassist and vocalist Mike Dean, guitarist Woody Weatherman and drummer Reed Mullin in the early '80s.[6] They were influenced by heavy metal bands like Black Sabbath, Iron Maiden, Scorpions and Judas Priest, as well as by hardcore groups like Black Flag, Bad Brains, Circle Jerks, Minor Threat and Germs.[7][8] Their hardcore punk-oriented 20-track debut Eye for an Eye—the only album featuring the vocalist Eric Eycke—was released in 1984 (later re-released by Caroline Records during 1989).[9] Soon after, Eycke left the band and C.O.C. continued as a three-piece with Dean and Mullin sharing the vocal duties on the 1985's follow-up Animosity.[6] In 1987, COC recruited Simon Bob Sinister after the breakup of their fellow Carolina band and Death Records labelmates Ugly Americans. The band's 1987 release, Technocracy, featured the hectic crossover thrash musicianship of COC with a cleaner vocal style than they had in the past.

Corrosion of Conformity performing in New York City on the Blind tour.

Mike Dean departed in 1987 and Simon Bob soon followed, leaving COC in a state of flux for a couple of years. The remaining members re-tuned the lineup and searched for a new vocalist, even posting a classified in Flipside Fanzine for a singer similar in sound to "James Hetfield or Ozzy Osbourne" to go with their new metal sound. Caroline Records released some old tracks with Mike singing during this time with the aptly named Six Songs with Mike Singing EP.

After much searching, Karl Agell was recruited on vocals, Phil Swisher on bass and Pepper Keenan as a second guitarist. The new line-up released 1991's Blind, gravitating towards a sludge/groove metal sound. Blind was the first COC album to receive mainstream attention. The video for "Vote with a Bullet" (the only song with Keenan on vocals on the album) received airplay on MTV and the album cracked the Billboard Heatseekers chart in early 1992. The album has sold around 250,000 copies in the US to date.

In 1993, Agell and Swisher left the band and formed the band Leadfoot, Dean returned and Keenan took over lead vocals. The following year COC signed to Columbia Records, and the release of Deliverance saw the band also incorporating stoner and southern rock influences, which they also carried onto the following albums. In 1994, their song Big Problems was featured on the Clerks soundtrack. The song "Clean My Wounds" was also featured in the anime movie Tekken: The Motion Picture.

Deliverance was the band's biggest selling album. This was mainly due to the singles "Albatross" and "Clean My Wounds" becoming Top 20 hits on rock radio and the album managed to spend almost four months on the Billboard 200, peaking at No. 155.[10] On the Heatseekers chart, it peaked at No. 5 and lasted almost a year on that particular chart. US sales for the album were just over 440,000 by the end of 2005 and this album should be eligible for Gold status within the next few years.

Wiseblood was released in October 1996. Despite producing a Top 30 radio hit with "Drowning in a Daydream" and a worldwide tour with Metallica, the album failed to match the sales set by the previous album. Total US sales to date are just over 150,000. "Drowning in a Daydream" was nominated at the Grammy Awards in 1998 for "Best Metal Performance".[11] 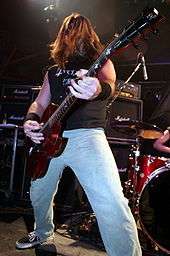 Soon after the release of Wiseblood, Columbia dropped COC, who then moved to Sanctuary Records. The band released its first album for its new label, America's Volume Dealer, in November 2000. The album was even more of a commercial failure than Wiseblood not even managing to make the Billboard 200. However, the single, "Congratulations Song", did give the band another Top 30 hit. No videos were made from the album. Mullin left the band in 2001. Over the next few years, the band worked with a series of drummers: Jimmy Bower of Eyehategod, local Raleigh percussion professor Merritt Partridge, Stanton Moore of Galactic and Reed's former drum technician Jason Patterson, who previously played drums in the Raleigh-based rock band Cry of Love.

In April 2005, COC released In the Arms of God to much critical acclaim. The album performed much better than their previous effort, debuting at No. 108 on the Billboard 200 and even topping the Heatseekers chart.[10][12] This was achieved without even one radio hit from the album. A video was made for the song "Stonebreaker" which saw airplay on MTV2's recently revived Headbanger's Ball. The band spent the rest of the year touring the US and Canada. They were the opening acts for Motörhead and Disturbed and also went on headlining tours with Crowbar, Fu Manchu, Alabama Thunderpussy and Danko Jones all providing support. A European tour was scheduled for September/October 2005 but was later cancelled, after Hurricane Katrina ravaged Keenan's hometown of New Orleans. A co-headlining UK tour with Clutch commenced in January 2006.

Corrosion of Conformity was on hiatus from 2006 to June 2010, while Pepper recorded and toured with Down. From March 2009 to June 2010, Karl Agell and Reed Mullin occasionally performed with Jerry Barrett, Scott Little, and Jason Browning (Browning eventually replaced by TR Gwynne) as "COC-Blind", playing the Blind album. Reed Mullin and Mike Dean along with Jason Browning also toured in a new band called "Righteous Fool", and have released a self-titled EP on Southern Lord Records.

On May 12, 2010, Blabbermouth.net reported that the Animosity lineup of Corrosion of Conformity was reuniting and working on a new album. They are planning some early-August shows lined up for the West Coast, although they have not yet been officially announced.[13] The band is still open to recording again as a four-piece with Pepper when the time is right, according to a message on the official C.O.C. website on May 15, 2010.[14] Pepper currently, has not officially left the band.[15]

Pepper joined his band mates on stage on June 17, 2011 at the Hellfest (Clisson, France) to play "Vote with a Bullet" as well as on June 19, 2011 in Bilbao (Spain) where they additionally performed together on "Señor Limpio". Pepper stated that he looks forward to working on some Deliverance type material in the near future with the band. The band released their eighth studio album, titled Corrosion of Conformity, on February 28, 2012 via Candlelight Records.

In September 2012, Corrosion of Conformity posted three pictures from the studio on Facebook, stating that they were working on a five-song EP called Megalodon with Mike Schaefer and John Custer. The entire EP was released for digital download via Scion A/V on November 14, 2012.

By January 2013, Corrosion of Conformity had begun writing new material for their ninth studio album,[16] IX, which was released on July 1, 2014.

In a September 2014 interview with Heavy Blog Is Heavy, drummer Reed Mullin confirmed that Corrosion of Conformity would reunite with guitarist/vocalist Pepper Keenan in 2015 to record a new album, followed by a tour.[17] They planned to begin work on their new album in January 2015.[5]

On January 14, 2015, Corrosion of Conformity announced a six-date UK tour, which took place in March and was their first tour with the Deliverance lineup in 14 years as well their first one with Keenan in nine years.[18] Corrosion of Conformity performed their first show with the re-united Deliverance era line-up of Pepper Keenan, Woody Weatherman, Mike Dean, and Reed Mullin on March 7, 2015 in Manchester, England.[19] Their first U.S. tour with the reunited line-up, supporting Clutch, was announced on July 28, 2015.[20] On June 6, 2016, Corrosion of Conformity announced the letting go of drummer Reed Mullin after a prolonged battle with alcohol addiction, resulting in a seizure before their concert in Edmonton, AB, Canada on the Lamb of God \ Clutch Tour. Mullin returned to the drum stool on the tour on June 8th.[21]

Collaborations and side projects

They have also collaborated with a number of other artists: James Hetfield of Metallica contributed vocals to the song "Man or Ash" on Wiseblood; Warren Haynes of the Allman Brothers' Band and Gov't Mule played slide guitar on "Stare Too Long" on America's Volume Dealer; and Stanton Moore of Galactic played drums on In the Arms of God.

Members of COC have also participated in collaborations: Keenan plays guitar with the metal supergroup Down, and Dean contributed vocals to a track titled "Access Babylon" on Dave Grohl's Probot project. Pepper also appears on Metallica's Garage Inc. cover record, playing guitar and singing the second verse of the Lynyrd Skynyrd song "Tuesday's Gone". He appears in the documentary Some Kind of Monster, auditioning to be Metallica's replacement for Jason Newsted.