For other uses, see Counterattack (disambiguation). 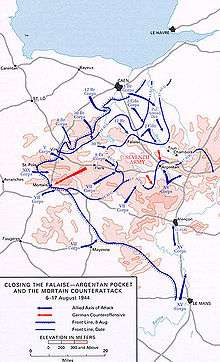 A counterattack is a tactic employed in response to an attack, with the term originating in "war games".[1] The general objective is to negate or thwart the advantage gained by the enemy during attack, while the specific objectives typically seek to regain lost ground or destroy the attacking enemy (this may take the form of an opposing sports team or military units).[1][2][3]

A saying, attributed to Napoleon Bonaparte illustrate the tactical importance of the counterattack : "the greatest danger occurs at the moment of victory". In the same spirit, in his Battle Studies, Ardant du Pic noticed that "he, general or mere captain, who employs every one in the storming of a position can be sure of seeing it retaken by an organised counter-attack of four men and a corporal".[4]