A criterium, or crit, is a bike race consisting of several laps around a closed circuit, the length of each lap or circuit ranging from about 1 km to 2 km. 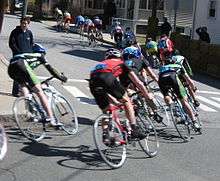 Race length can be determined by a number of laps or total time, in which case the number of remaining laps is calculated as the race progresses. Generally the event's duration (commonly one hour) is shorter than that of a traditional road race — which can last many hours, sometimes over the course of several days or even weeks, as in a Grand Tour. However, the average speed and intensity are appreciably higher. The winner is the first rider to cross the finish line without having been "lapped".

Events often have prizes (called primes pronounced /priːmz/ and are usually cash) for winning specific intermediate laps (for instance, every 10th lap). A bell is usually rung to announce to the riders that whoever wins the next lap, wins the prime.

Success in road criteriums requires a mix of good technical skills — in particular, the ability to corner smoothly while holding the line on the road, as well as rapidly and sharply — and riding safely with a large group on a short circuit and exceptional "sprint" ability to attack other riders and repeatedly accelerate hard from corners.

Criteriums are relatively easy to organize, do not require a large amount of space, and are good for live spectators as they allow them to see the riders pass by many times. They are the most common type of bicycle racing in the continental United States. They are also gaining popularity as a format for mountain bike events.

Belgium's Flanders region hosts a number of criteriums, as does the Netherlands. The most notable of these are held just after the Tour de France. However, criteriums in Europe are mostly held in the format of a points race. First, second, and third rider at every 5th lap gets 3, 2, 1 points respectively, with double points for the final sprint. It was a long tradition that after the Tour these criteriums were fixed to have favourable results for local favorites, who may be participating for show after having ridden in a larger race such as the Tour de France.[1]

Racing bicycles used for criteriums are typically no different than those used in other mass-start road events. However, some criterium racers will choose bicycles with:

In the UK, Elite and Cat 1+2 riders often race together whilst Cat 3+4 riders race separately; however Elite and Cat 1+2+3 and 4th category only events are also common. Some events known as a handicap races allow Elite and Cat 1+2+3+4 riders to compete in the same race with riders from the different categories being set off at defined intervals starting with the 4th category. Most events contain a women's race which accepts all categories of female riders; however some women's events are only open to higher category riders, whilst some events allow women to compete with category Cat 3+4 men.

The races will also vary depending upon how many people from separate teams enter, which will impact whether it will be a "free-for-all" or a team-focused event.