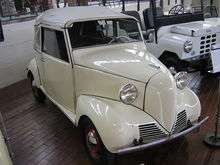 The Crosley was an automobile manufactured by the Crosley Corporation and later by Crosley Motors Incorporated in the United States intermittently from 1939 to 1952. 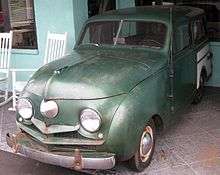 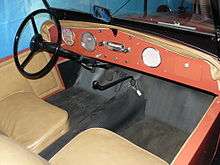 Industrialist Powel Crosley, Jr., of Cincinnati, Ohio, owner of Crosley Broadcasting Corporation and the Cincinnati Reds baseball team, had ambitious plans to build a subcompact car and with the able assistance of his younger, graduate engineer brother Lewis Crosley, developed assembly plants at Richmond, Indiana, and Marion, Indiana. In May 1939, the first car was shown at the Indianapolis Speedway. It was a two-door convertible that weighed under 1,000-pound (454 kg) and sold for US$250. It did not achieve sales success, but in 1941 more body styles were introduced.

The chassis had an 80-inch (2,032 mm) wheelbase using half-elliptic springs with beam axle in front and quarter-elliptic springs in the rear. The power came from a two-cylinder Waukesha air-cooled engine that had the fan as an integral part of the flywheel. The engine was connected with a three-speed transmission and then directly via a torque tube to the rear axle, thus eliminating the need for joints. However, this arrangement was judged unreliable, and conventional universal joints were fitted beginning in 1941.

In 1941, the body styles available were expanded to include two- and four-passenger convertibles, a convertible sedan, a station wagon, a panel truck, a pickup, and two models called "Parkway Delivery" (a mini-panel with no roof over the front seat) and "Covered Wagon" (a convertible pickup truck with a removable back seat). Crosley's first metal-topped sedan (the Liberty Sedan) was introduced for 1942.

During World War II, the Crosley became attractive because of gasoline rationing and the good mileage it could achieve: 50 miles per US gallon (4.7 L/100 km; 60 mpg-imp).[1] Crosley was the last company to cease production of civilian vehicles in 1942, partly to aid Crosley sales to facilitate fuel conservation, and partly because the War Production Board needed time to determine a use for Crosley's small factories.

Civilian car production resumed at the Marion facility in 1946[1] with the new, larger and aerodynamic CC model, designed by the firm of Sundberg & Ferar of Royal Oak, Michigan. (The Richmond facility had been sold during the war years.) 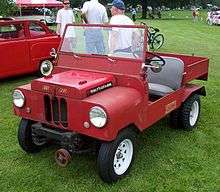 Crosley introduced several "firsts" in the American automobile industry, including the first use of the term 'Sport Utility' in 1948 (albeit on an open model based on the wagon, not a wagon on a truck chassis); first mass-market single overhead camshaft (SOHC) engine in 1946; first slab-sided postwar car, also in 1946; first all steel-bodied wagon in 1947; first American car to be fitted with 4-wheel caliper type disc brakes in the 1949 model year (Chrysler Imperial introduced four-wheel disc brakes as standard equipment on Crown Imperials at the beginning of the 1949 model year, but they were not of the caliper type); and the first American sports car, the Hotshot, in the 1949 model year.[2] 1950 brought the Farm-O-Road model, a 63-inch (1,600 mm) wheelbase utility vehicle predictive of the John Deere Gator and other UTVs. 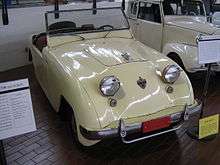 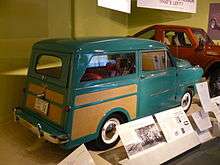 With 24,871 cars sold, Crosley's best year was 1948. Sales began to slip in 1949, and adding the Crosley Hotshot and a combination farm tractor-Jeep-like vehicle called the Farm-O-Road in 1950, could not stop the decline. In 1952, only 1522 Crosley vehicles were sold. Production ceased after the July 3rd shift that year, and the plant was sold to the General Tire and Rubber Company. A plan to sell the Crosley auto concern to Nash failed to materialize, when Nash merged with Hudson.(Nash, Club Newsletter 1986, Vol. 1)

Regardless of its short life and small size, the Hotshot is well remembered as a phenomenal sports car within its class. A Hotshot won the 1950 Sam Collier Memorial Sebring Grand Prix of Endurance Six Hours,[5] (averaging a blistering 52 mph) and a Siata 300 fitted with Crosley power won the SCCA's 12 hour Vero Beach race. Throughout, the 1950s Crosley engines dominated 750 cc sports car racing, winning 10 out of 12 SCCA west-coast races alone.[6]

The original engine is the Waukesha Model 150 Cub Twin, a 580 cc air-cooled L-head opposed twin-cylinder engine built by Waukesha Engines of Waukesha, Wisconsin, and used from 1939 through 1942. It was replaced in 1946 with the CoBra (for "Copper Brazed"), a 724 cc overhead-cam four with a 2.5 in (63.5 mm) bore and 2.25 in (57.2 mm) stroke. That engine in turn was replaced in 1949 by the new and more reliable CIBA (Crosley Cast Iron Block Assembly) engine utilizing five main bearings.

The CoBra (Copper Brazed, also known as "The Mighty Tin") was originally developed by Lloyd Taylor, of Taylor Engines in California, for military use aboard PT boats and B-17 Flying Fortress bombers. The engine was made from sheet metal rather than cast iron like most other engines. This was done to get a thin, uniform wall thickness and thus avoid the creation of hot spots around the combustion chamber that could ignite the fuel, causing pre-ignition (knocks), which in turn limited the compression ratio. These engines were used mainly to power generators, refrigeration compressors, etc., and were widely praised for their successes in the war effort.

The engine was adopted for automobile use in 1946. It was a small, lightweight engine with single overhead camshaft driven by two sets of bevel gears and a vertical shaft at the front of the block.[7] The unitary block and cylinder head[8] weighed only 14.8 pounds (6.7 kg) dry; complete with all accessories (including the flywheel) weighing only 133 pounds (60 kg). The engine displaced 44 cu in (724 cc) and produced 26.5 hp (20 kW) at 5,400 rpm.[8] Longevity was measured in hours and was strictly controlled by equipment maintenance schedules for the wartime duties, but corrosion became a problem for these engines in civilian service. This problem with these automotive powerplants had tarnished Crosley's reputation by 1948.[8]

Crosley racing engine with a supercharger

The CIBA (Crosley Cast Iron Block Assembly) was a more traditional and more reliable engine utilizing a cast-iron block. When Crosley Motors, Inc. was sold, the engine was renamed "AeroJet" and production continued. Production of the AeroJet ended in 1955 and the engine rights were sold to Fageol and later to a series of different companies ending in 1972 with the Fisher-Pierce Bearcat 55. Maritime modifications mostly included increasing displacement and converting the engine to operate with a vertical axis.

In Europe the Crosley CIBA would be used to great advantage in 750cc sports car class, eventually maturing to a double overhead camshaft (DOHC) design used in the Bandini 750 sport internazionale as well as Nardi 750LM and Siata Amica.