Cycling at the 1984 Summer Olympics

The cycling competition at the 1984 Summer Olympics in Los Angeles consisted of three road cycling events and five track cycling events. For the first time, women's cycling events were included in the Olympic program, with a single event, the individual road race. Also newly introduced in these Games was the men's points race event.[1]

The American cyclist Pat McDonough later admitted to blood doping at the 1984 Los Angeles Games.[2] Following the games it was revealed that one-third of the U.S. cycling team had received blood transfusions before the games.[2] Blood doping was banned by the International Olympic Committee in 1985, though no test existed for it at the time.[2] 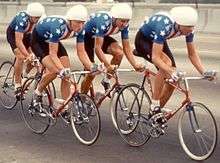