Daktronics is an American company based in Brookings, South Dakota that designs, manufactures, sells, and services video displays, scoreboards, digital billboards, dynamic message signs, sound systems, and related products. The company is known for its electronic LED displays. Founded in 1968 by two South Dakota State University professors, Daktronics grew from a provider of electronic voting systems for state legislatures to one of the world's largest suppliers of electronic signs. 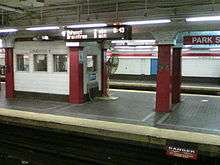 Daktronics was founded in 1968 by Aelred Kurtenbach and Duane Sander, professors of electrical engineering at South Dakota State University in Brookings, SD. The company began with the design and manufacture of electronic voting systems for state legislatures.

Daktronics currently has its headquarters in Brookings, SD, with other facilities in Sioux Falls, SD, Redwood Falls, MN, Shanghai, China, and Belgium, along with more than 50 regional offices around the world.[1]

Daktronics has been supplying scoreboards and video displays for the Olympics for several years. However, the Olympic Games often have contracts with larger corporations, such as Swiss Timing, so the Daktronics name is not often used.

Daktronics has been an influence in NBA rule changes in the 2000s. The company manufactured the first backboard light strips to comply with buzzer beater instant replay rulings, and in 2004, developed a see-through shot clock to improve spectator visibility.[30]