David Rolfe Graeber (/ˈɡreɪbər/; born 12 February 1961) is a London-based anthropologist and anarchist activist, perhaps best known for his 2011 volume Debt: The First 5000 Years. He is Professor of Anthropology at the London School of Economics.[1]

As an assistant professor and associate professor of anthropology at Yale from 1998–2007, he specialised in theories of value and social theory. The university's decision not to rehire him when he would otherwise have become eligible for tenure sparked an academic controversy, and a petition with more than 4,500 signatures.[2] He went on to become, from 2007–13, Reader in Social Anthropology at Goldsmiths, University of London.[3]

His activism includes protests against the 3rd Summit of the Americas in Quebec City in 2001, and the 2002 World Economic Forum in New York City. Graeber was a leading figure in the Occupy Wall Street movement, and is sometimes credited with having coined the slogan, "We are the 99 percent".[4]

Graeber's parents, who were in their forties when Graeber was born, were self-taught working-class intellectuals in New York.[5] Graeber's mother, Ruth Rubinstein, had been a garment worker, and played the lead role in the 1930s musical comedy revue Pins & Needles, staged by the International Ladies’ Garment Workers’ Union.[5][6] Graeber's father Kenneth, who was affiliated with the Youth Communist League in college, though he quit well before the Hitler-Stalin pact, participated in the Spanish Revolution in Barcelona and fought in the Spanish Civil War.[7] He later worked as a plate stripper on offset printers.[5] Graeber grew up in New York, in a cooperative apartment building described by Business Week magazine as "suffused with radical politics."[5] Graeber has been an anarchist since the age of 16, according to an interview he gave to The Village Voice in 2005.[8]

Graeber graduated from Phillips Academy Andover in 1978 and received his B.A. from the State University of New York at Purchase in 1984. He received his Master's degree and Doctorate at the University of Chicago, where he won a Fulbright fellowship to conduct twenty months of ethnographic field research in Betafo, Madagascar, beginning in 1989.[9] His resulting Ph.D. thesis on magic, slavery, and politics was supervised by Marshall Sahlins and entitled The Disastrous Ordeal of 1987: Memory and Violence in Rural Madagascar.[2][10]

In 1998, two years after completing his PhD, Graeber became assistant professor at Yale University, then became associate professor.[2] In May 2005, the Yale Anthropology department decided not to renew Graeber's contract, preventing consideration for tenure which was scheduled for 2008. Pointing to Graeber's anthropological scholarship, his supporters (including fellow anthropologists, former students and activists) claimed that the decision was politically motivated. More than 4,500 people signed petitions supporting him, and anthropologists such as Marshall Sahlins, Laura Nader, Michael Taussig, and Maurice Bloch called for Yale to rescind its decision.[2] Bloch, who had been a professor of anthropology at the London School of Economics and the Collège de France, and writer on Madagascar, made the following statement about Graeber in a letter to the university:

The Yale administration argued that Graeber's dismissal was in keeping with Yale's policy of granting tenure to few junior faculty (thus generating the widespread false impression that this was, in fact, a tenure case) and gave no formal explanation for its actions. Graeber has suggested that the University's decision might have been influenced by his support of a student of his who was targeted for expulsion because of her membership in GESO, Yale's graduate student union.[2][12][13][14]

In December 2005, Graeber agreed to leave the university after a one-year paid sabbatical. That spring he taught two final classes: "Introduction to Cultural Anthropology" (attended by over 200 students) and a seminar entitled "Direct Action and Radical Social Theory".[15] The latter was the only explicitly radical-themed course he taught at Yale.

On 25 May 2006, Graeber was invited to give the Malinowski Lecture at the London School of Economics; his address was entitled "Beyond Power/Knowledge: an exploration of the relation of power, ignorance and stupidity".[16] This lecture has since been edited into an essay, titled "Dead zones of the imagination: On violence, bureaucracy and interpretive labor".[17] The anthropology department at the University asks an anthropologist at a relatively early stage of their career to give the Malinowski Lecture each year, and only invites those who are considered to have made a significant contribution to anthropological theory. That same year, Graeber was asked to present the keynote address in the 100th anniversary Diamond Jubilee meetings of the Association of Social Anthropologists.[18] In April 2011, he presented the anthropology department's annual Distinguished Lecture at Berkeley,[19] and in May 2012 delivered the Second Annual Marilyn Strathern Lecture at Cambridge.

From 2008 through Spring 2013, Graeber was a lecturer and a reader at Goldsmith's College of the University of London. In 2013, he accepted a professorship at the London School of Economics.[20][21]

Graeber is the author of Fragments of an Anarchist Anthropology and Towards an Anthropological Theory of Value: The False Coin of Our Own Dreams. He has done extensive anthropological work in Madagascar, writing his doctoral thesis (The Disastrous Ordeal of 1987: Memory and Violence in Rural Madagascar) on the continuing social division between the descendants of nobles and the descendants of former slaves. A book based on his dissertation, Lost People: Magic and the Legacy of Slavery in Madagascar, appeared from Indiana University Press in September 2007. A book of collected essays, Possibilities: Essays on Hierarchy, Rebellion, and Desire was published by AK Press in November 2007 and Direct Action: An Ethnography appeared from the same press in August 2009, as well as a collection of essays co-edited with Stevphen Shukaitis called Constituent Imagination: Militant Investigations//Collective Theorization (AK Press, May 2007). These were followed by a major historical monograph, Debt: The First 5000 Years (Melville House), which appeared in July 2011.[22] Speaking about Debt with the Brooklyn Rail, Graeber remarked:

The IMF (International Monetary Fund) and what they did to countries in the Global South—which is, of course, exactly the same thing bankers are starting to do at home now—is just a modern version of this old story. That is, creditors and governments saying you’re having a financial crisis, you owe money, obviously you must pay your debts. There’s no question of forgiving debts. Therefore, people are going to have to stop eating so much. The money has to be extracted from the most vulnerable members of society. Lives are destroyed; millions of people die. People would never dream of supporting such a policy until you say, “Well, they have to pay their debts.”[23]

He is currently working on an historical work on the origins of social inequality with University College London archaeologist David Wengrow, and a collection of essays entitled "On Kings" with his former teacher Marshall Sahlins.

His book on the Occupy movement and related issues was released as The Democracy Project in 2013. One of the points he raises in this book is the increase in what he calls bullshit jobs, referring to meaningless employment. He sees such jobs as being "concentrated in professional, managerial, clerical, sales, and service workers".[24] As he explained also in an article in STRIKE! magazine:

In the year 1930, John Maynard Keynes predicted that, by century’s end, technology would have advanced sufficiently that countries like Great Britain or the United States would have achieved a 15-hour work week. There’s every reason to believe he was right. In technological terms, we are quite capable of this. And yet it didn’t happen. Instead, technology has been marshaled, if anything, to figure out ways to make us all work more. In order to achieve this, jobs have had to be created that are, effectively, pointless. Huge swathes of people, in Europe and North America in particular, spend their entire working lives performing tasks they secretly believe do not really need to be performed. The moral and spiritual damage that comes from this situation is profound. It is a scar across our collective soul. Yet virtually no one talks about it.[25]

Since January 2013, Graeber has been a contributing editor at The Baffler magazine in Cambridge, Massachusetts. Since 2011, he has also been the Editor-at-large of the open access journal HAU: The Journal of Ethnographic Theory, for which he and founder Giovanni da Col co-wrote the founding theoretical statement and manifesto of the school of "ethnographic theory" 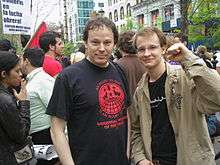 Graeber (left) at a rally for immigrant rights at Union Square, New York City in 2007

In addition to his academic work, Graeber has a history of both direct and indirect involvement in political activism, including membership in the labor union Industrial Workers of the World, a role in protests against the World Economic Forum in New York City in 2002, support for the 2010 UK student protests,[26] and an early role in the Occupy Wall Street movement. He is co-founder of the Anti-Capitalist Convergence.[27]

In November 2011, Rolling Stone magazine credited Graeber with giving the Occupy Wall Street movement its theme: "We are the 99 percent" though Graeber has written in The Democracy Project that the slogan "was a collective creation".[28] Rolling Stone says Graeber helped create the first New York City General Assembly, with only 60 participants, on August 2.[29] He spent the next six weeks involved with the burgeoning movement, including facilitating general assemblies, attending working group meetings, and organizing legal and medical training and classes on nonviolent resistance. A few days after the encampment of Zuccotti Park began, he left New York for Austin, Texas.[5]

Graeber has argued that the Occupy Wall Street movement's lack of recognition of the legitimacy of either existing political institutions or the legal structure, its embrace of non-hierarchical consensus decision-making and of prefigurative politics make it a fundamentally anarchist project.[30] Comparing it to the Arab Spring, Graeber has claimed that Occupy Wall Street and other contemporary grassroots protests represent "the opening salvo in a wave of negotiations over the dissolution of the American Empire."[31] He is a member of the labor union Industrial Workers of the World and of the Interim Committee for the emerging International Organization for a Participatory Society.[32]