David Samuel Kinderlehrer (23 October 1941, Allentown, Pennsylvania)[1] is an American mathematician, who works on partial differential equations and related mathematics applied to materials in biology and physics. 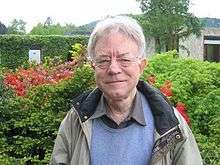 He works on partial differential equations, minimal surfaces, and variational inequalities, with mathematical applications to the microstructure of biological materials, to solid state physics, and to materials science, including crystalline microstructure, liquid crystals, molecular mechanisms of intracellular transport, and models of ion transport.

In 2012 Kinderlehrer was elected a Fellow of the American Mathematical Society.[3] In 1974 in Vancouver he was an invited speaker (Elliptic Variational Inequalities) at the International Mathematical Congress.

In 2002 he was the editor of the Hans Lewy Selecta published by Birkhäuser. His doctoral students include Irene Fonseca.

This article is issued from Wikipedia - version of the 1/10/2016. The text is available under the Creative Commons Attribution/Share Alike but additional terms may apply for the media files.