De Excidio et Conquestu Britanniae (Latin for "On the Ruin and Conquest of Britain") is a work by the 6th-century British cleric St Gildas. It is a sermon in three parts condemning the acts of Gildas' contemporaries, both secular and religious, whom he blames for the dire state of affairs in sub-Roman Britain. It is one of the most important sources for the history of Britain in the 5th and 6th centuries, as it is the only significant source for the period written by a near contemporary of the people and events described.

Part I contains a narrative of British history from the Roman conquest to Gildas' time; it includes references to Ambrosius Aurelianus and the Britons' victory against the Saxons at the Battle of Mons Badonicus. Part II is a condemnation of five kings for their various sins, including both obscure figures and relatively well-documented ones such as Maelgwn Gwynedd. Part III is a similar attack upon the British clergy of the age.

Gildas's work is of great importance to historians, because although it is not intended primarily as history, it is almost the only surviving source written by a near-contemporary of British events in the fifth and sixth centuries. The usual date that has been given for the composition of the work is some time in the 540s, but it is now regarded as quite possibly earlier, in the first quarter of the sixth century, or even before that.[1] Cambridge historian Karen George, in her exhaustive study of Gildas' text, offers a date range of c. 510-530 AD.[2] In the view of the historian Guy Halsall:

There is some evidence for an 'early Gildas', writing in the late fifth century. This includes Gildas' rhetorical education, his Latin style, his theological concerns, and a rereading of his historical section and his place within it. I tend towards this interpretation, although it cannot be proven. It is unlikely that Gildas wrote before 480/490 or much after about 550; beyond that we cannot go.[3]

Gildas' intent in his writing was to preach to his contemporaries after the manner of an old testament prophet, not to write an account for posterity. Thus, he gives historical details where it serves his purpose; for instance he offers one of the first descriptions of Hadrian's Wall and perhaps the Antonine Wall, though his account of their history is highly inaccurate.[4][5] However, he omits details where they do not contribute to his message; he is consistently vague, giving few names and no firm dates.[6] Nonetheless, De Excidio remains an important work not only for medieval history but also for British history in general, as it is one of the few works written in Britain to survive from the 6th century.

In De Excidio et Conquestu Britanniae, Gildas mentions that the year of his birth was the same year as the Battle of Mons Badonicus, which might have taken place in 482 AD.[7] Gildas' rhetorical writing style indicates a classical Latin education that could hardly have been available to any Britons after the 5th century. The Annales Cambriae gives the year of his death as 570; however the Annals of Tigernach dates his death to 569.

Gildas's treatise was first published in 1525 by Polydore Vergil, but with many avowed alterations and omissions. In 1568 John Joscelyn, secretary to Archbishop Parker, issued a new edition of it more in conformity with manuscript authority; and in 1691 a still more carefully revised edition by Thomas Gale appeared at Oxford. It was frequently reprinted on the Continent during the 16th century, and once or twice since. The next English edition, described by August Potthast as editio pessima, was that published by the English Historical Society in 1838, and edited by the Rev. J. Stevenson. The text of Gildas founded on Gale's edition collated with two other manuscripts, with elaborate introductions, is included in the Monumenta Historica Britannica. Another edition is in Arthur West Haddan and William Stubbs, Councils and ecclesiastical documents relating to Great Britain and Ireland (Oxford, 1869); the latest edition is that by Theodor Mommsen in Monumenta Germaniae Historica auct. antiq. xiii. (Chronica min. iii.), 1898. The text as we have it is thus a scholarly reconstruction, descended from a manuscript stemma that may not actually represent the archetype.[8]

The first part consists of Gildas' explanation for his work and a brief narrative of Roman Britain from its conquest under the principate to Gildas' time:

Concerning her obstinacy, subjection and rebellion, about her second subjection and harsh servitude; concerning religion, of persecution, the holy martyrs, many heresies, of tyrants, of two plundering races, concerning the defense and a further devastation, of a second vengeance and a third devastation, concerning hunger, of the letter to Agitius [usually identified with the patrician Aëtius], of victory, of crimes, of enemies suddenly announced, a memorable plague, a council, an enemy more savage than the first, the subversion of cities, concerning those whose survived, and concerning the final victory of our country that has been granted to our time by the will of God.

Part I is particularly notable as the earliest source to mention Ambrosius Aurelianus, an important figure of British tradition credited with turning the tide against the Anglo-Saxon conquest. It also contains the earliest mention of the Britons' victory at the Battle of Mons Badonicus.

The second part consists of a condemnation of five British kings, and as it is the only contemporary information about them, it is of particular interest to scholars of British history. Gildas swathes the condemnations in allegorical beasts from the Book of Daniel and the Book of Revelation, likening the kings to the beasts described there: a lion, a leopard, a bear, and a dragon.[9] The kings excoriated by Gildas are: 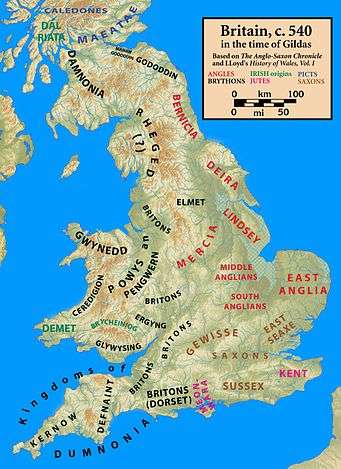 The reason for Gildas's disaffection for these individuals is unknown. He was selective in his choice of kings, as he had no comments concerning the kings of the other British kingdoms that were thriving at the time, such as Rheged, Gododdin, Elmet, Pengwern/Powys, or the kingdoms of modern-day southern England. That he chose only the kings associated with one king's pre-eminence (Maglocune, the "dragon") suggests a reason other than his claim of moral outrage over personal depravity. Neither outrage nor a doctrinal dispute would seem to justify beginning the condemnation of the five kings with a personal attack against Constantine's mother (the "unclean lioness").

Maelgwn (Maglocune), King of Gwynedd, receives the most sweeping condemnation and is described almost as a high king over the other kings (the power-giving dragon of the Apocalypse). The Isle of Anglesey was the base of power of the kings of Gwynedd, so describing Maelgwn as the 'dragon of the island' is appropriate. His pre-eminence over other kings is confirmed indirectly in other sources. For example, Maelgwn was a generous contributor to the cause of Christianity throughout Wales, implying a responsibility beyond the boundaries of his own kingdom. He made donations to support Saint Brynach in Dyfed, Saint Cadoc in Gwynllwg, Saint Cybi in Anglesey, Saint Padarn in Ceredigion, and Saint Tydecho in Powys. He is also associated with the foundation of Bangor.[20]

Constantine is obscure. His Damnonia is generally identified with the kingdom of Dumnonia in southwestern Britain.[21][22] A number of later traditions refer to a king of this name in the area.[23] Some scholars note the possibility that Gildas instead intended the area of the Damnonii in western Scotland, though Thomas D. O'Sullivan considers this unlikely.[24]

Cuneglasse is the Cynglas (modern Welsh: Cynlas) of the royal genealogies, the son of Owain Whitetooth son of Einion son of Cunedda. He is associated with the southern Gwynedd region of Penllyn, and he was the ancestor of a later King of Gwynedd, Caradog ap Meirion. One of his brothers was Saint Seiriol.[25]

Aurelius Conanus, also called Caninus, cannot be connected to any particular region of Britain. John Edward Lloyd suggests a connection between this king and the descendants of the great hero Ambrosius Aurelianus mentioned previously by Gildas; if this is true his kingdom may have been located somewhere in territory subsequently taken by the Anglo-Saxons.[26] If the form Caninus should be connected with the Cuna(g)nus found in 6th-century writings, the result in the later royal genealogies would be Cynan, a commonly occurring name.[26] However, this is a speculation.

Vortiporius (Vortipore, Old Welsh Guortepir) was a king of Demetia (Dyfed) who is well-attested in both Welsh and Irish genealogies, the son of Aircol. Though it is not easily supportable on linguistic grounds, some scholars maintain that he is mentioned on a memorial stone (discovered in 1895) bearing an inscriptions in both Latin and ogham. The Latin inscription reads Memoria Voteporigis protictoris. The ogham inscription consists of a Primitive Irish spelling of the name: Votecorigas.[27] If the man mentioned in both inscriptions was the same as Gildas' Vortiporius, we would expect the Latin and Irish forms to have been spelled *Vorteporigis and *Vortecorigas, respectively; the difference in spelling has led some to suggest that they are not the same person, though it is possible that they were related.[28]

The third part begins with the words, "Britain has priests, but they are fools; numerous ministers, but they are shameless; clerics, but they are wily plunderers." Gildas continues his jeremiad against the clergy of his age, but does not explicitly mention any names in this section, and so does not cast any light on the history of the Christian church in this period.

Legacy in the Anglo-Saxon period

Following the conquest of Britain described in De excidio, Gildas continued to provide an important model for Anglo-Saxon writers both in Latin and in English. Bede's Historia ecclesiastica gentis Anglorum relies heavily on Gildas for its account of the Anglo-Saxon invasions, and draws out the implications of Gildas's thesis of loss of divine favour by the Britons to suggest that this favour has in turn passed to the now Christianised Anglo-Saxons.

In the later Old English period, Gildas's writing provides a major model for Alcuin's treatment of the Viking invasions, in particular his letters relating to the sack of Lindisfarne in 793. The invocation of Gildas as a historical example serves to suggest the idea of moral and religious reform as a remedy for the invasions. Likewise, Wulfstan of York draws on Gildas to make a similar point in his sermons, particularly in the Sermo Lupi ad Anglos.

Gildas's work is important for reasons beyond the historical information he provides. At the time when Gildas was writing there was a Christian church in Britain. Gildas uses Latin to address the rulers he excoriates and regards Britons, at least to some degree, as Roman citizens, despite the collapse of central imperial authority. By 597, when St Augustine arrived in Kent, England was populated by Anglo-Saxon pagans, and the new rulers did not think of themselves as Roman citizens. Dating Gildas's words more exactly would hence provide a little more certainty about the timeline of the transition from post-Roman Britain to Anglo-Saxon England; a certainty that would be the more valuable as precise dates and reliable facts are extremely scarce for this period.[1][29]