Not to be confused with Deer Abbey or Dear Abbeys. 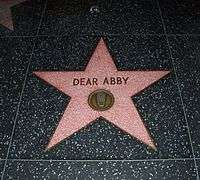 Dear Abby is an advice column founded in 1956 by Pauline Phillips under the pen name "Abigail Van Buren" and carried on today by her daughter, Jeanne Phillips, who now owns the legal rights to the pen name.

According to Pauline Phillips, she came up with the pen name Abigail Van Buren by combining the name of Biblical figure Abigail in the Book of I Samuel, with the last name of former U.S. President Martin Van Buren.

The column was syndicated by McNaught Syndicate from 1956 until 1966, when it moved to Universal Press Syndicate. Dear Abby's current syndication company claims the column is "well-known for sound, compassionate advice, delivered with the straightforward style of a good friend."[1]

Abby was born Pauline Esther Friedman, and her twin sister was born Esther Pauline Friedman. Abby was known as Popo, and her sister was Eppie[4] (a nickname from E.P.).

A similar column, Ask Ann Landers, was written from 1955 to 2002 by the elder Phillips twin sister Eppie Lederer. A few months before Pauline Phillips started Dear Abby, her twin sister Eppie Lederer took over the Ann Landers column created by Chicago Sun-Times advice columnist Ruth Crowley in 1943. This produced a rivalry and lengthy estrangement between the two sisters.[5]

On February 13, 1987, the Chicago Tribune announced that the Ann Landers column was moving to the Tribune, which had published the Dear Abby column for years. The Tribune ran both columns, Landers every day and Abby six days a week.[2]

You could move.
— Abigail Van Buren, Answer to a reader who complained that a gay couple was moving in across the street and wanted to know what he could do to improve the quality of the neighborhood.