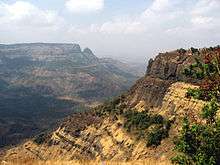 The term "trap" has been used in geology since 1785–95 for such rock formations. It is derived from the Scandinavian word for stairs ("trappa") and refers to the step-like hills forming the landscape of the region.[2]

The Deccan Traps began forming 66.25 million years ago,[1] at the end of the Cretaceous period. The bulk of the volcanic eruption occurred at the Western Ghats (near Mumbai) some 66 million years ago. This series of eruptions may have lasted less than 30,000 years in total.[3]

The original area covered by the lava flows is estimated to have been as large as 1.5 million km², approximately half the size of modern India. The Deccan Traps region was reduced to its current size by erosion and plate tectonics; the present area of directly observable lava flows is around 512,000 km2 (197,684 sq mi).

Effect on mass extinctions and climate

The release of volcanic gases, particularly sulfur dioxide, during the formation of the traps contributed to contemporary climate change. Data points to an average drop in temperature of 2 °C in this period.[4]

Because of its magnitude, scientists formerly speculated that the gases released during the formation of the Deccan Traps played a role in the Cretaceous–Paleogene (K–Pg) extinction event (also known as the Cretaceous–Tertiary extinction).[5] It was theorized that sudden cooling due to sulfurous volcanic gases released by the formation of the traps and localised gas concentrations may have contributed significantly to the K–Pg, as well as other mass extinctions.[6] However, the current consensus among the scientific community is that the extinction was triggered by the Chicxulub impact event in North America (which would have produced a sunlight-blocking dust cloud that killed much of the plant life and reduced global temperature, called an impact winter).[7]

Work published in 2014 by geologist Gerta Keller and others on the timing of the Deccan volcanism suggests the extinction may have been caused by both the volcanism and the impact event.[8][9] This was followed by a similar study in 2015.[10][11]

Within the Deccan Traps at least 95% of the lavas are tholeiitic basalts, however other rock types do occur:

Mantle xenoliths have been described from Kachchh (northwestern India) and elsewhere in the western Deccan.

The Deccan Traps are famous for the beds of fossils that have been found between layers of lava. Particularly well known species include the frog Oxyglossus pusillus (Owen) of the Eocene of India and the toothed frog Indobatrachus, an early lineage of modern frogs, which is now placed in the Australian family Myobatrachidae.[12][13] The infratrappean and intertrappean beds also contain fossil freshwater mollusks.[14]

It is postulated that the Deccan Traps eruption was associated with a deep mantle plume. The area of long-term eruption (the hotspot), known as the Réunion hotspot, is suspected of both causing the Deccan Traps eruption and opening the rift that once separated the Seychelles plateau from India. Seafloor spreading at the boundary between the Indian and African Plates subsequently pushed India north over the plume, which now lies under Réunion island in the Indian Ocean, southwest of India. The mantle plume model has, however, been challenged.[15]

Data continues to emerge which supports the plume model. The motion of the Indian tectonic plate and the eruptive history of the Deccan traps show strong correlations. Based on data from marine magnetic profiles, a pulse of unusually rapid plate motion begins at the same time as the first pulse of Deccan flood basalts, which is dated at 67 million years ago. The spreading rate rapidly increased and reached a maximum at the same time as the peak basaltic eruptions. The spreading rate then dropped off, with the decrease occurring around 63 million years ago, by which time the main phase of Deccan volcanism ended. This correlation is seen as driven by plume dynamics.[16]

The Indian and African plates' motions have also been shown to be coupled, with the common element being the position of these plates relative to the location of the Réunion plume head. The onset of accelerated motion of India coincides with a large slowing of the rate of counterclockwise rotation of Africa. The close correlations between the plate motions suggest that they were both driven by the force of the Réunion plume.[16]

There is some evidence to link the Deccan Traps eruption to the asteroid impact which created the Chicxulub crater in the Mexican state of Yucatán. The combination of the asteroid impact and the resulting eruption may have been responsible for the mass extinctions that occurred at the time that separates the Cretaceous and Paleogene periods, known as the K–Pg boundary.[17]

A geological structure exists in the sea floor off the west coast of India that has been suggested as a possible impact crater, in this context called the Shiva crater. It has also been dated at approximately 66 million years ago, potentially matching the Deccan traps. The researchers claiming that this feature is an impact crater suggest that the impact may have been the triggering event for the Deccan Traps as well as contributing to the acceleration of the Indian plate in the early Paleogene.[18] However, the current consensus in the Earth science community is that this feature is unlikely to be an actual impact crater.[19][20]