Dejan Jakovic (born 16 July 1985) is a Canadian international soccer player who plays for Japanese club Shimizu S-Pulse and the Canadian national team, as a defender.

Born in Karlovac, Croatia prior to the break-up of the former Yugoslavia, Jakovic was brought by his parents to Canada at the age of six following the outbreak of the Croatian War of Independence in Croatia in 1991. They settled in Etobicoke, part of metropolitan Toronto.[2]

Jakovic took up association football in Canada. He was a four-year letterwinner at Scarlett Heights Academy, and was named team MVP as a junior and senior, captaining both indoor and outdoor teams. He played in the Canadian national youth program, and also for two-time Ontario Cup winner Woodbridge Strikers under Bob Graham. He was a member of the team that competed at the 2004 Dallas Cup, played with former UAB teammate Lukasz Kwapisz.[3]

At the age of 18 Jakovic had a trial with OFK Beograd, but was not signed by the team.[4] Instead, Jakovic accepted a scholarship to the University of Alabama at Birmingham, and went on to play four years of college soccer for the Blazers.[3]In 2007, he played with the Canadian Lions of the Canadian Soccer League where he was selected for the Locust CSL All Star game.[5]

On 28 June 2008, Jakovic joined Red Star Belgrade in preparations for the upcoming 2008–09 season, after successfully completing a tryout with the team.[6] He officially signed with the club on 30 June 2008.[7]

Jakovic made three league starts at the beginning of the season under head coach Zdeněk Zeman. However, following the coaching change on 6 September 2008, Dejan lost his spot in the team, and failed to register a single league appearance following the appointment of new head coach Čedomir Janevski. After the completion of the 2008 half-season Red Star began looking at options to move him. In December it was reported that he would be sent to FK Rad along with Marko Blažić, another player who started under Zeman but had played sparsely since Janevski took over, as part of the deal to bring defender Nemanja Pejčinović to Red Star.[8] However, by February 2009, no trade had been announced by the teams, and he was still on the list Red Star players that started preparations for second half of the season.[9] 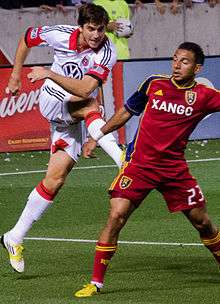 Jakovic signed for Major League Soccer side D.C. United on 27 February 2009.[10] Jakovic scored his first goal for the club on 26 May 2012 against New England Revolution, the game ended in a 3–2 home victory.[11] Jaković signed a contract extension with D.C. United following the 2012 season.[12]

Jakovic made his debut for senior Canadian men's soccer team on 30 January 2008 against Martinique. Later in 2008 he earned five caps for the Canada U-23 squad in the 2008 CONCACAF Men's Pre-Olympic Tournament, during which Canada finished third, one place out of qualification. Jakovic was also chosen in the 23-man roster for the 2009 CONCACAF Gold Cup;[14] Canada won Group A with 7 points before being knocked out by Honduras in the quarter-finals.[15]

Jakovic was selected for the 2011 CONCACAF Gold Cup, however sustained a hamstring injury a week prior to the group stage in a friendly at BMO Field against Ecuador the match ended 2–2. David Edgar was selected on 6 June, to replace Jakovic in the 23-man squad for the CONCACAF tournament.[16]