Delphinium is a genus of about 300 species of perennial flowering plants in the family Ranunculaceae, native throughout the Northern Hemisphere and also on the high mountains of tropical Africa.[1]

All members of the Delphinium genus are toxic to humans and livestock.[2] The common name "larkspur" is shared between perennial Delphinium species and annual species of the genus Consolida.[3] Molecular data show that Consolida, as well as another segregate genus, Aconitella, are both embedded in Delphinium.[4] The name "delphinium" derives from the Latin for "dolphin", referring to the shape of the nectary. 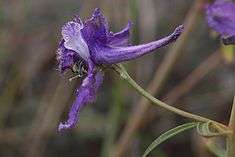 The leaves are deeply lobed with three to seven toothed, pointed lobes in a palmate shape. The main flowering stem is erect, and varies greatly in size between the species, from 10 centimetres in some alpine species, up to 2 m tall in the larger meadowland species.

In June and July (Northern Hemisphere), the plant is topped with a raceme of many flowers, varying in color from purple and blue, to red, yellow, or white. In most species each flower consists of five petal-like sepals which grow together to form a hollow pocket with a spur at the end, which gives the plant its name, usually more or less dark blue. Within the sepals are four true petals, small, inconspicuous, and commonly colored similarly to the sepals. The eponymous long spur of the upper sepal encloses the nectar-containing spurs of the two upper petals.[5]

The seeds are small and often shiny black. The plants flower from late spring to late summer, and are pollinated by butterflies and bumble bees. Despite the toxicity, Delphinium species are used as food plants by the larvae of some Lepidoptera species, including the dot moth and small angle shades. 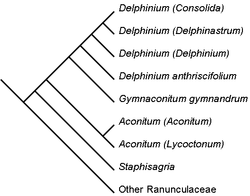 Subgenera of Delphinium and related taxa

Genetic analysis suggests that Delphinium sensu lato, as it was delineated before the 21st century, is polyphyletic. Nested within Delphinium s.l. are Aconitella, Consolida, and Aconitum. To make Delphinium monophyletic, several interventions were made. The new genus Staphisagria was erected containing Delphinium staphisagria, D. requini, and D. pictum, representing the sister group to all other Delphinieae.[6] Further genetic analysis has shown that the two large subgenera Aconitum (Aconitum) and Aconitum (Lycoctonum) are the sister group to Aconitum gymnandrum, Delphinium (Delphinium), Delphinium (Delphinastrum), Consolida and Aconitella. To make Aconitum monophyletic, A. gymnandrum has now been reassigned to a new monotypic genus, Gymnaconitum. Finally, Consolida and Aconitella are synonymized with Delphinium.[7]

D. arthriscifolium is sister to all other species of Delphinium sensu stricto (so excluding Staphisagria). It should be placed in its own subgenus, but no proposal naming this subgenus has been made yet. The subgenera Delphinium (Delphinium) and Delphinium (Delphinastrum) are sister to the group consisting of the species of Consolida and Aconitella, which together make up the subgenus Delphinium (Consolida). Aconitella cannot be retained as a subgenus because A. barbata does not cluster with the remaining species previously assigned to that genus, without creating five further subgenera.[7]

Several species of Delphinium have been reassigned:[7]

Delphiniums can attract butterflies and other pollinators.[8] 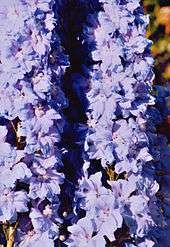 Various delphiniums are cultivated as ornamental plants, for traditional and native plant gardens. The numerous hybrids and cultivars are primarily used as garden plants, providing height at the back of the summer border, in association with roses, lilies, and geraniums.

Most delphinium hybrids and cultivars are derived from D. elatum. Hybridisation was developed in the 19th-century, led by Victor Lemoine in France.[9] Other hybrid crosses have included D. bruninianum, D. cardinale, D. cheilanthum, and D. formosum.[10]

Numerous cultivars have been selected as garden plants, and for cut flowers and floristry. They are available in shades of white, pink, purple, and blue. The blooming plant is also used in displays and specialist competitions at flower and garden shows, such as the Chelsea Flower Show.[11]

The 'Pacific Giant' hybrids are a group with individual single-color cultivar names, developed by Reinelt in the United States. They typically grow to 4–6 ft (1.2–1.8 m) tall on long stems, by 2–3 ft (0.61–0.91 m) wide. They reportedly can tolerate deer.[8] Millennium delphinium hybrids, bred by Dowdeswell's in New Zealand, are reportedly better in warmer climates than the Pacific hybrids.[12][13] Flower colors in shades of red, orange, and pink have been hybridized from D. cardinale by Americans Reinelt and Samuelson.[10]

The following delphinium cultivars have received the Award of Garden Merit from the British Royal Horticultural Society:

All parts of these plants are considered toxic to humans, especially the younger parts,[2] causing severe digestive discomfort if ingested, and skin irritation.[2][3][5][42] Larkspur, especially tall larkspur, is a significant cause of cattle poisoning on rangelands in the western United States.[43] Larkspur is more common in high-elevation areas, and many ranchers delay moving cattle onto such ranges until late summer when the toxicity of the plants is reduced.[44] Death is through cardiotoxic and neuromuscular blocking effects, and can occur within a few hours of ingestion.[45] All parts of the plant contain various diterpenoid alkaloids, typified by methyllycaconitine, so are very poisonous.[42]

The juice of the flowers, particularly D. consolida, mixed with alum, gives a blue ink.[46]