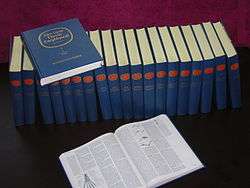 Den Store Danske Encyklopædi (The Great Danish Encyclopedia) is the most comprehensive contemporary Danish language encyclopedia. The 20 volumes of the encyclopedia were published successively between 1994 and 2001; a one-volume supplement was published in 2002 and two index volumes in 2003. The work comprises 115,000 articles, ranging in size from single-line cross references to the 130-page entry Danmark (Denmark). The articles were written by a staff of about 4,000 academic experts led by editor-in-chief Jørn Lund. Articles longer than a few dozen lines are signed by their authors. Many articles are illustrated.

The encyclopedia was published by Danmarks Nationalleksikon A/S (Denmark's National Encyclopedia), a subsidiary of Denmark's grand old publishing house Gyldendal that was set up for the purpose. The project was inspired by the almost contemporary Swedish Nationalencyklopedin; it received financial support from the Augustinus Foundation and was backed by a governmental inflation guarantee on pre-paid subscriptions. Eventually about 35,000 copies were sold.

The text of the paper encyclopedia was also published, but without illustrations, on CD-ROMs for Microsoft Windows in 2004 and for macOS in 2005. In January 2006, it was announced that a full online edition of the encyclopedia was expected to be available in later 2006 on a subscription basis, with the help of a renewed grant from the Augustinus Foundation. In March 2008, the publishing house announced that it failed to get sufficient numbers of subscribers and declared the project a failure.

The CD ROM version of the encyclopedia is likely not to work without an update on never versions of Windows XP/Vista, due to a security fix from Microsoft.[1][2]

An online version of the encyclopedia was released February 26, 2009 - free-of-charge, generating revenue displaying ads. The free online version was published using wiki software, opening up for user contributions.[3] The decision to offer it free of charge was criticized by buyers of the DKK 25,000[4] (approx USD 4,500 (2010)) paper encyclopedia, to whom the publishing house originally had pledged that a reduced-price paper version would never be released. The publishing house insists that all pledges are honored, as the free-of-charge version is web-based, and not a paper encyclopedia.[5]

Gyldendal's vision is to create a hybrid between the traditional encyclopedia and user-generated encyclopedias like Wikipedia. While registered users may contribute with content and upload images etc. a professional and long-time editorial staff will maintain oversight over contributions.[4][5] The status of an article shall be clearly flagged, if it is user-generated content or if it has been approved by the editorial staff.[6] The vision is that the online version shall be the Dane's preferred choice for updated and trustworthy information, maintaining the status of a traditional encyclopedia.[6] Gyldendal seeks to recruit about 1,500 subject matter experts to verify user contributions to the about 161,000 articles - by March 2009 about 1,100 experts had been enrolled.[4] The permanent editorial staff comprises 20 persons.[7]

The original articles from Den Store Danske Encyclopædi can be used freely as provided it is not distributed or used commercially.[8]

The new articles (made by the users) can be used freely provided the source is referenced using a deep link.[9]

Den Store Danske is covered by the Danish copyright law and it belongs to Gyldendal.[10]