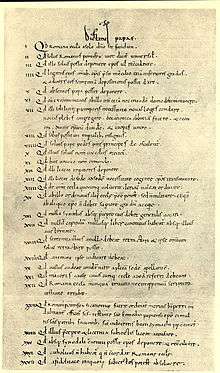 The Dictatus papae in a Vatican manuscript

Dictatus papae is a compilation of 27 statements of powers arrogated to the Pope that was included in Pope Gregory VII's register under the year 1075.[1] Some historians argue that it was written (or dictated) by Gregory VII himself; others argue that it has been inserted in the register at a later date, and that it had a different origin.[2] In 1087 Cardinal Deusdedit published a collection of decretals, dedicated to Pope Victor III, that embodied the law of the Church – Canon law – which he had compiled from many sources, both legitimate and false (see Pseudo-Isidore). The Dictatus papae agrees so clearly and closely with this collection that some have argued the Dictatus must have been based on it; and so must be of a later date of compilation and insertion in the papal register than 1087.[3]

Dictatus Papae is a heading in the letter-collection that implies that the pope composed the piece himself. It does not mean a 'papal dictate' or any kind of a manifesto; rather it means 'papal dictation'. It was not published, in the sense of being widely copied and made known outside the immediate circle of the papal curia. "None of the conflicts of the years 1075 and following can be directly traced to opposition to it (though several of the claims made in it were also made by Gregory and his supporters during these conflicts)".[4]

The principles expressed in Dictatus papae are those of the Gregorian Reform, which had been initiated by Gregory decades before he ascended the throne as Gregory VII. The axioms of the Dictatus advance the strongest case of papal supremacy and infallibility. The axiom "That it may be permitted to him to depose emperors" qualified the early medieval world-balance embodied in the symbol of the "two swords" - spiritual and temporal, the complementary powers of potestas (or imperium) and auctoritas under which the West had been ruled since Merovingian times, based on Roman precedents - and emphasised the spiritual over the temporal.

The Dictates of the Pope