Dimitri Kitsikis (Greek: Δημήτρης Κιτσίκης; born 2 June 1935) is a Greek Turkologist, Professor of International Relations and Geopolitics. He has also published poetry in French and Greek.

Dimitri Kitsikis is a Turkologist and Professor of International Relations and Geopolitics at the University of Ottawa in Ottawa, Canada since 1970, Fellow of the Royal Society of Canada; he received his doctoral degree in 1963 from the Sorbonne, Paris, under the supervision of Pierre Renouvin. He has been named one of the "three top geopolitical thinkers worldwide, Karl Haushofer, Halford Mackinder and Dimitri Kitsikis".[1] While pursuing his doctoral studies in Paris, he worked from 1960 to 1962 as a research assistant at the Graduate Institute of International Studies in Geneva. He derives his origin from a notable Greek-Orthodox family of intellectuals and acclaimed professionals of 19th-century Greece.[2][3][4][5] He holds both French and Canadian citizenships, in addition to his Greek citizenship.[6]

His father, Nicolas Kitsikis (1887–1978), rector of the Polytechnic School in Athens, the most famous civil engineer of Greece, was a senator and an MP. His uncle, Konstantinos Kitsikis (1893–1969), a celebrated architect, Nicolas' younger brother, was also a professor at the Athens Polytechnic School. His grandfather, a chief justice, Dimitri Kitsikis senior (1850–1898), had settled in Athens, in 1865, from Lesbos, his native island and was married to Cassandra (Κασσάνδρα), the sister of a member of the Greek Parliament, Dimitri Hatsopoulos (Δημήτρης Χατσόπουλος), 1844–1913, born in Karpenisi.[7]

His mother, Beata Kitsikis née Petychakis (Μπεάτα Πετυχάκη), was born in Herakleion, Crete, from a wealthy Cretan family and Greek Italian nobles from Trieste of mixed Roman Catholic and Orthodox origin. Her father, Emmanuel Petychakis founded a beverage production plant in Cairo, Egypt and her stepfather Aristidis Stergiadis was the High Commissioner of Greece in Smyrna (Izmir) from 1919 to 1922.

During the Greek civil war, at the age of 12, he was sent to a boarding school in Paris, by Octave Merlier,[8] the head of the French Institute in Athens, because his mother had been condemned to death as a communist fighter.[9] He stayed in France for 23 years with his British wife Anne Hubbard, the daughter of a chief justice, whom he had married in Scotland in 1955,[10] with his two first children, Tatiana and Nicolas. He was expelled from the French University for his active participation as a Maoist in the French student revolt of May 1968.[11] Since 1958, Dimitri Kitsikis had traveled to the P.R. of China where he became a committed Maoist.[12] He was then promoted to associate and later to full professor, after being invited to Canada in 1970 by the University of Ottawa. Since then, he has been living and working in Ottawa as well as in Athens,[13] with his second wife, Ada (Αδαμαντία) Nikolarou, whom he married in 1975, the daughter of a farmer from the historic Byzantine town of Mystras, near Sparta and from whom he has two more children, Agis Ioannis Kitsikis and Kranay Kitsikis-De Leonardis. He is an admirer of the Byzantine Empire. Kitsikis is thus a Panhellen, a cosmopolitan Greek, holding Greek citizenship, in addition to French and Canadian ones.

Since he was a child he had an idée fixe: He wanted not only to reconcile Greeks and Turks, but also to unite them into a Greek Turkish Confederation which would (to an extent) be a reincarnation of the Byzantine/Ottoman Empires; thus filling the political, cultural and economic vacuum that's left behind by their absence in the East Mediterranean region.[14] A devout Orthodox Christian, he came to sympathise with the Turkish religion of Bektashism-Alevism[15] and sought to ally it with Orthodoxy, in order to form a basis for a future political union between Athens and Ankara. Believing in the collaboration of religious communities, as in the millet system of the Ottoman Empire, he worked closely with Shia Muslims in Iran,[16] Jews in Israel[17] and Hindu vaishnavs in India.[18] His elder son Nicolas has been a Vaishnav since 1984 and lives with his Hindu wife in the Vaishnav community of Gainesville, Florida. Although a member of the official Church of Greece, he always sympathised with the Old-Calendarist movement, the adherents of which reject the Church's use of the Gregorian (New) calendar and maintain a traditionalist attitude towards Christian life and worship. As Orthodoxy prevailed over the heresy of Iconoclasm in the 9th century and restored the use of the icon in Christian worship, he stands convinced that the Old Calendar will once again be adopted by those Orthodox Churches which rejected it in the earlier part of the 20th century.[19]

Since the 1970s he has taught Chinese and Turkish history, political ideologies and geopolitics at a number of universities in the West.[20] His plethora of books have been translated in many languages, while articles concerning his work have been published in Chinese, the Balkan languages, German, French, English, Spanish, Portuguese and Russian.[21] He also taught at the Universities of Boğaziçi in Istanbul, Bilkent in Ankara and Gediz in Izmir where he became one of the closest friends and advisers of the President of the Turkish Republic, Turgut Özal.[22] In Greece, he was resident researcher at the National Institute of Social Studies and taught at Deree College, the American College in Athens.[23]

He is a public figure in Greece and had been a close friend and advisor of Greek Premier Konstantinos Karamanlis senior in the 1960s and 1970s.[24] He contributes regularly with political articles to Greek magazines and, since 1996, publishes in Athens a Greek quarterly journal of Geopolitics named after his civilisation model, «Endiamese Perioche, Ἐνδιάμεση Περιοχή» or “Intermediate Region”.[25]

Named after his father, who died in 1978, the “Nikos Kitsikis Library and Archives” resides in the home of family member, the former high commissioner of Smyrna (during the Greek occupation of the city between 1919 and 1922) Aristidis Stergiadis (1861–1949), in Herakleion, Crete. Dimitri Kitsikis was honoured by the Greek State in 2006. The latter established and financed the “Dimitri Kitsikis Public Foundation and Library” in Athens.[26] 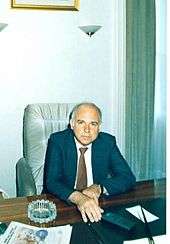 Kitsikis at his office inside the Çankaya Köşkü Presidential Mansion in Ankara, Turkey, 1990, when he was an adviser to Turkish President Turgut Özal.

Kitsikis, since the 1960s, has been the recognised theorist, first in Greece and then in Turkey, of the idea of a Greek-Turkish Confederation, which he has promoted by influencing statesmen, politicians, journalists, artists and thinkers in both countries.[27] His books in Turkish became best sellers in Turkey and were praised by the Prime Minister of Turkey.[28] He kept close ties with Prime Ministers Konstantinos Karamanlis senior of Greece and Turgut Özal[29] of Turkey as well as the Chinese leaders Mao Zedong and Deng Xiaoping.[30] His books in Greek created one of the greatest controversies ever encountered in Greek historiography. They were even debated in the Greek Parliament.[31] The well-established notion of Greeks enslaved by Turks and a series of beliefs on the Ottoman Empire, which had been traditionally taught in schools and universities throughout Greece, such as the story of the so-called "secret school," were strongly questioned.[32] While his father, Nikos Kitsikis, rector of the Polytechnical School, was a leftist Member of Parliament, Senator and elected Mayor of Athens, Dimitri Kitsikis is averse towards the parliamentary system, which he regards as foreign to the Greek model of a government by the people or laocracy, Greek "λαοκρατία".[33]

He has been the initiator in France of the branch of the History of International Relations that deals with propaganda and pressure as a government weapon of foreign policy.[34] He also opened the way to the study of technocracy in international politics.[35] He has insisted that religion is an essential component of international politics and strove by conferences and other means to facilitate the collaboration between the four main religions of Judaism, Christianity, Islam and Hinduism.[36] He organised Orthodox dialogues with Iranian Shiites and Indian Hindus. He worked with Israeli Jews and fundamentalist Catholics from Quebec, where he, along with his students, produced the quarterly journal Aquila (eagle) which, with a double-headed eagle on the front cover promoted the Byzantine imperial idea in Catholic circles. He also worked closely with the Fethullah Gülen Sunni Muslim Movement (See Gülen's "Dialog of Civilizations Platform"). However, the idea of a global hellenism is prevalent in all his works and teaching.[37]

He created a model[38] for a new approach of the three political ideologies of liberalism, fascism and communism, and he has published on the history of China. He is the founder of the branch of study known as Photohistory.[39]

He is also a recognised poet, with six collections of poetry published by Pierre Jean Oswald (Paris), Naaman (Québec), Kedros (Κέδρος), Hestia (Ἑστία) and Akritas (Ἀκρίτας).[40] In 1991, he was honored with the first Greek-Turkish prize for poetry Abdi İpekçi, a Turkish journalist who had been shot dead by terrorists.[41] Some of his poetry books, namely Omphalos (1977), l'Orocc dans l'âge de Kali (1985) and le Paradis perdu sur les barricades (1989–1993), became part of an anthology of 32 Canadian poets[42] in the book by H. Bouraoui and J. Flamand. His poetic work was included in the Dictionnaire des citations littéraires de l'Ontario français, depuis 1960.[43] His poems were also used in the books by the Greek artist Georgette Kambani.[44]

Kitsikis regards the Greek language as the cornerstone of planetary civilization, and he thus deems it an honour for one to be able to write in Greek. He believes that the treatment of the language should be taken out of the hands of Greek philologists who are currently destroying it. He defends the continued use of polytonic Greek, traditional spelling and the freedom to write in any literary tone. He regards as erroneous only the implementation of a Greek form not used from the time of Homer to today.[45]

He is the founder of four concepts setting a novel approach for the history of the Greek-Turkish Area to be understood: a) The "Intermediate Region" (Endiamese Perioche, Ἐνδιάμεση Περιοχή) of civilisation, extending from the Adriatic Sea to the Indus River, between the Euro-American West and the Hindu-Chinese East.[46][47] b) Eastern Party in Greece and Turkey (Ἀνατολικὴ Παράταξις) versus Western Party (Δυτικὴ Παράταξις) as an antagonist couple;[48] c) Hellenoturkism (Ἑλληνοτουρκισμός) as an ideology and as a phenomenon of culture for the last one thousand years;[49] d) Bektashi-Alevi religious origin of the Ottoman Dynasty, the islamisation of which developed hand-in-hand with its secularisation and westernisation.[50]

In 2007, A Comparative History of Greece and China from Antiquity to the Present was published. The book is notable in that it homes in on the relationship between the two civilisations throughout their entire history spanning three millennia. The study raises two concepts: 1) the Greek-Chinese civilisation in a global context and 2) its political expression during the last 2500 years, that is, ecumenical empire as a glorified organisational model.[51]

Ahead of the September 2015 general elections in Greece, Kitsikis endorsed the Golden Dawn party, calling it "the only patriotic choice."[52]