The Roman Catholic Diocese of Arras is a diocese of the Latin Rite of the Roman Catholic church, in France. The episcopal see is the Arras Cathedral, in the city of Arras. The diocese encompasses all of the Department of Pas-de-Calais, in the Region of Nord-Pas-de-Calais. The current bishop is Jean-Paul Jaeger, appointed in 1998.

A person named Martin is said to have evangelized Artois and Arras, capital of the Celtic Atrebates by 350AD; however, these early Christian communities did not survive the barbarian invasions of the Roman Empire in the fifth century.[1]

At the beginning of the sixth century Remigius, Archbishop of Reims, placed in the See of Arras St. Vedastus (St. Vaast) (d. c. 540),[1][2] who had been the teacher of the Merovingian king Clovis I after the victory of Tolbiac. His successors, Dominicus and Vedulphus, are also both venerated as saints. After the death of Vedulphus, the See of Arras was transferred to Cambrai, and it was not until 1093 that Arras again became a diocese. At the time of the reform of the bishoprics of the Netherlands in 1559, the diocese had 422 parishes. Its metropolitan was changed from Reims to Cambrai by Pope Paul IV.[3]

Before the French Revolution the Cathedral Chapter consisted of the Provost,[4] the Dean, the Archdeacon of Arras (Artois),[5] the Archdeacon of Ostrevant,[6] the Treasurer, the Penitentiary, 40 canons and 52 chaplains. There were some 400 parishes and 12 rural deans.

King Philip II of Spain and Pope Pius IV founded the University of Douai in 1562 as a weapon in the Counterreformation and the French Wars of Religion.[7] The Jesuits had a college at Douai, founded in 1599, and suppressed in 1762.[8]

During the French revolution the diocese of Arras was abolished and subsumed into a new diocese, the 'Pas de Calais', coterminous with the new 'Departement of the Pas-de-Calais', and a suffragan of the 'Metropole des Côtes de la Manche'. The clergy were required to swear and oath to the Constitution, and under the terms of the Civil Constitution of the Clergy a new bishop was to be elected by all the voters of the departement. This placed them in schism with the Roman Catholic Church and the Pope. On 27 March 1791 the electors chose, on the fourth ballot, the curé of Saint-Nicolas-sur-les-Fossés at Arras, Pierre-Joseph Porion.[9] In September 1801 First Consul Bonaparte abolished the Constitutional Church and signed a Concordat with Pope Pius VII which restored the Roman Catholic Church in France.[10] The diocese of Arras was restored.[11]

Among the bishops of Arras were Cardinal Antoine Perrenot de Granvelle, Councillor of the emperor Charles V, Bishop of Arras from 1545 to 1562, later Archbishop of Mechelen and Viceroy of Naples; François Richardot, a celebrated preacher, Bishop of Arras from 1562 to 1575; and Monseigneur Parisis (d. 1866), who figured prominently in the political assemblies of 1848. 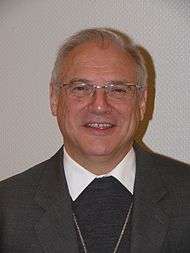