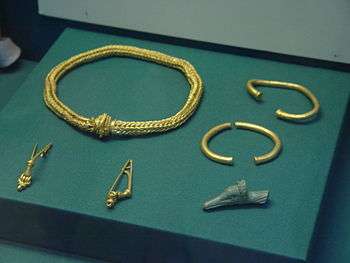 The Winchester Hoard (Iron Age) may have been a diplomatic gift.[1]
Not to be confused with Gift basket diplomacy.

A diplomatic gift is a gift given by a diplomat, politician or leader when visiting a foreign country. Usually the gift is reciprocated by the host. The use of diplomatic gifts dates back to the ancient world and givers have competed to outdo each other in the lavishness of their gifts. Examples include silks given to the West by the Byzantines in the early Middle Ages,[2] the luxury book,[3] and panda diplomacy by the Chinese in the twentieth century.

After the Congress of Vienna (1814-15), Rundell, Bridge, and Rundell, goldsmiths to the British royal family and government, prepared 22 snuff-boxes to a value of 1000 guineas each to be given as diplomatic gifts.[5]

Diplomatic gifts have the potential to seal international friendships, but also to be rebuffed, to seem mismatched, or to accidentally send the wrong message. Taiwan rejected the People's Republic of China's offer of a Panda[6] and the gifts given by British Prime Minister Gordon Brown to President Obama in 2009 were widely seen as more thoughtful than those given by Obama to Brown.[7] A 2012 gift of a "British" table tennis table to President Obama seemed ideal until it was revealed that it was designed in Britain but made in China, evoking worries about the decline of British manufacturing industry.[8]