For other uses, see Disc (disambiguation). 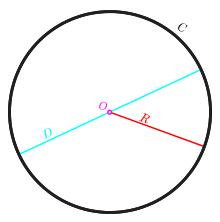 Disk with circumference (C) in black, diameter (D) in cyan, radius (R) in red, and centre (O) in magenta.

In geometry, a disk (also spelled disc)[1] is the region in a plane bounded by a circle. A disk is said to be closed if it contains the circle that constitutes its boundary, and open if it does not.[2]

In Cartesian coordinates, the open disk of center

and radius R is given by the formula[1]

The disk has circular symmetry.

The open disk and the closed disk are not topologically equivalent (that is, they are not homeomorphic), as they have different topological properties from each other. For instance, every closed disk is compact whereas every open disk is not compact.[4] However from the viewpoint of algebraic topology they share many properties: both of them are contractible[5] and so are homotopy equivalent to a single point. This implies that their fundamental groups are trivial, and all homology groups are trivial except the 0th one, which is isomorphic to Z. The Euler characteristic of a point (and therefore also that of a closed or open disk) is 1.[6]

Every continuous map from the closed disk to itself has at least one fixed point (we don't require the map to be bijective or even surjective); this is the case n=2 of the Brouwer fixed point theorem.[7] The statement is false for the open disk:[8]

Consider for example the function